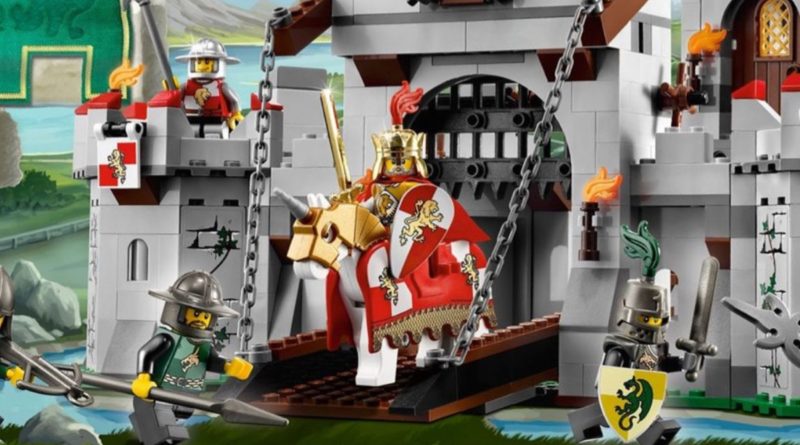 The rumoured LEGO 10305 Lion King’s Castle is thought not to include a king minifigure – and if you want to buy one separately, now is the time to act.

Despite its reported set name (which may or may not be legitimate), the flagship 90th anniversary set is now said to be absent a king among its 20-strong minifigure line-up. There’s a queen, an entire legion of Lion Knights, a couple of Forestmen, and even a baker – but no king, at least according to the most recent updates on the rumoured Castle set.

Thankfully, we’ve got decades of classic LEGO Castle sets to fall back on, with a handful of suitable kings among them. If you don’t already have one in your collection, though, you’re probably going to want to buy one sooner rather than later – come August, when 10305 Lion King’s Castle is said to be launching, everyone will want one, and demand could push prices up dramatically.

Given the set is rumoured to be focused on the Lion Knights, we’ve got a couple of options for a king minifigure that could fit the bill. The original Lion Knights subtheme didn’t include a king minifigure (even though its flagship set was titled 6080 King’s Castle – noticing a pattern here?), but 2010’s LEGO Kingdoms range leaned back into the colour scheme and aesthetic of the ‘80s faction.

Three different versions of Kingdoms’ king minifigure arrived in sets between 2010 and 2012, and any of them would make for a viable candidate to lead the renewed Lion Knights. A red-clad version with a dark red cape appeared in two sets, 7188 King’s Carriage Ambush and 10223 Kingdoms Joust, and is currently available at BrickLink for £19.64 new or £14.48 new on average.

A gold-armoured variant with a fancy red plume was actually the first Kingdoms king, however, debuting in 2010’s 7946 King’s Castle. He sports the same shiny chrome gold crown and a lion emblem on his breastplate, making for an all-round superior minifigure, but with the price tag to match: current listings sit at £24.47 new and £20.80 used on BrickLink.

If your budget won’t stretch quite that far – and with a rumoured price tag of $349.99 for 10305 Lion King’s Castle on the horizon, that’s absolutely fair – there’s also the king minifigure from 2012’s 853373 Kingdoms Chess Set, which matches the red-clad variant in all but the colour of its cape, and also sports a plume. That one will set you back just £10.38 new or £8.47 used on average.

One final option from Kingdoms is 9349 Fairytale & Historic Minifigure Set’s king, which is comparatively simple – it doesn’t come with printed legs, and its face print is very basic – but cheaper for it, too, coming in at just £5.54 used. (New prices start at £4.81 but average out at a surprising £15.53 on BrickLink.) This king’s torso also features a lion emblem.

Beyond Kingdoms, there’s also possibly the LEGO Group’s most detailed monarch to date in 2015’s 71008 Series 13 Collectible Minifigures. The Classic King minifigure, with his bold printing, sculpted beard and two-piece cape, is available for an average price of £17.75 new and £9.09 used.

The prices for all these minifigures start lower than their average, of course, so it’s worth comparing their costs for yourself, alongside weighing up which one you reckon will fit in best with 10305 Lion King’s Castle (if it arrives as expected).

The original Lion Knights minifigures should give you some idea of what the new ones could look like, but remember that if last year’s Black Falcons (in 21325 Medieval Blacksmith and 31120 Medieval Castle) are anything to go by, we’re probably looking at modernised version of the Lion Knights, too.

If you’re keen on any of these kings, now could be the time to buy – but as always, take all reports of 10305 Lion King’s Castle, and specifically its minifigure line-up, with a pinch of salt at this stage.

One thought on “If you want a LEGO king for the rumoured 90th anniversary set, act fast”