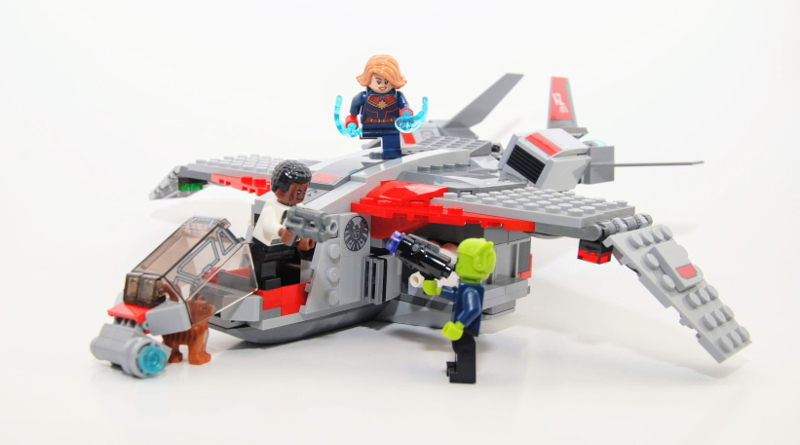 With Captain Marvel about to be introduced into the Marvel Cinematic Universe, the character arrives with the Quinjet in LEGO Marvel 76127 Captain Marvel and the Skrull Attack

Captain Marvel is flying into cinemas this week on March 8. The LEGO Group has jumped in on the hype and released one individual set for the film – 76127 Captain Marvel and the Skrull Attack. This set features a smaller, more simplistic Quinjet design than fans have seen before design and includes iconic “new” characters – Captain Marvel, young Nick Fury and a Skrull. 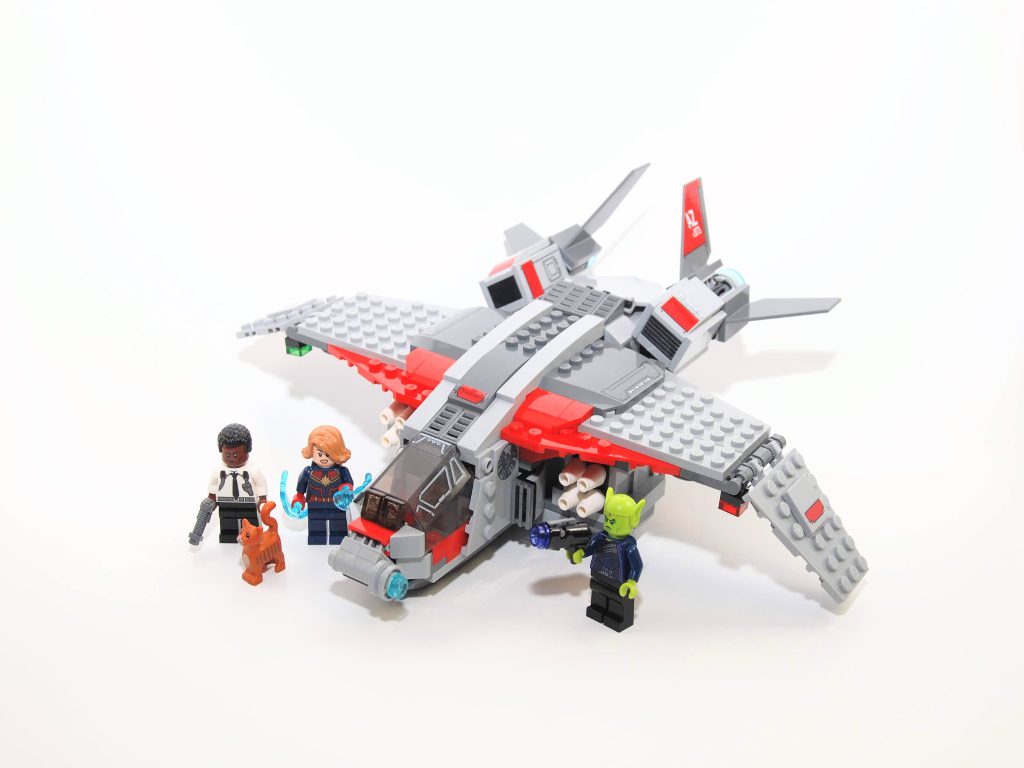 This Quinjet, first off, is incredibly strong and sturdy. This model is very swooshable, great for play in the hands of a younger fan. You can drop this Quinjet, crash it into something and for the most part it will stay completely intact. I do appreciate the structural integrity of this model.

The Quinjet does allow for some different positioning for its various wings. The tips of its main wings are able to hinge all the way up, and about three quarters of the way down. The four angled wings on the thrusters can also be shifted from side to side, closer together or further apart. Lastly, the large angular panel on top near the back can be lifted up, but I don’t believe this is intended to be a wing feature.

The opening – or more accurately detachable – cockpit reveals a single seat for a minifigure in a rather cramped space. I wish that the cockpit held two minifigures in front of each other, especially since the centre of the craft is hollow and could’ve allowed for it. The cargo bay and cargo hatch are also a bit of a let down, with not enough space to put anything but the cat inside (the opening is only two studs wide). Unfortunately, this must have been something else sacrificed to scale down this Quinjet.

The firing mechanism is rather nice and effective. The craft can shoot 8 flick-fire missiles out of its side compartments by using a fairly standard push-to-fire mechanism. The nice thing about it is that both sides are easy to active while you are holding it in flight, due to the openness of the sides on this ship. It is possible to hold the Quinjet in only one hand, from the side, and still easily access the firing trigger (the black container element).

Finally, all of the extra details you see on 76127 Captain Marvel and the Skrull Attack are in the form of stickers, rather than printed elements. A lot of the stickers are very small, and are be placed on curved elements (such as the cockpit) which can make it a little tough to have everything lined up neatly.

Three minifigures plus a cat are included in this stand-alone set for Captain Marvel. There is quite the controversy on the Captain Marvel minifigure. Some fans don’t like the face, the hair and lack of leg printing. While I do think a different hairpiece might have been better, and leg printing should have been used, it is not a bad minifigure at all. The torso printing is excellent and looks very similar to her in-movie costume.

Younger Nick Fury looks excellent and I love the generic torso he features, which will undoubtedly be used in many other custom builds to come. The Skrull’s skin tone should have been darker (perhaps sand green), but this figure certainly stands out thanks to the lime green used. I do wish that the set came with at least one additional minifigure such as Agent Coulson.

I’m almost glad that the LEGO Group only decided to do one set for Captain Marvel as we really don’t know what to expect from the film, but I wish there had been a few things changed with this model to make it a worthy single set. Perhaps there will be more Captain Marvel sets in the Avengers: Endgame wave or beyond.

Until then, this is – literally – still a solid set that is a nice way to get a smaller Quinjet to play with while creating battles with your Marvel super heroes. It will be interesting to see Captain Marvel when the film arrives, and find out how exactly this Quinjet and Danvers’ pilot skills are put to use.

76127 Captain Marvel and the Skrull Attack is available now at shop.lego.com. You can help support Brick Fanatics’ work by using our affiliate links.