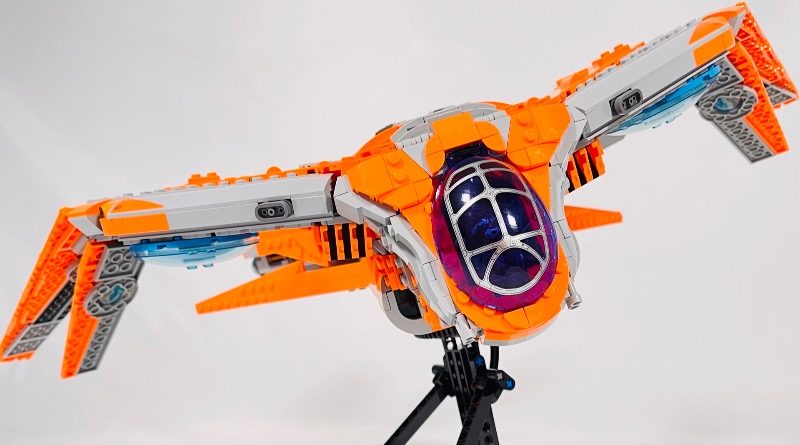 LEGO Marvel gets its own Ultimate Collector Series-style set in 76193 The Guardians’ Ship, which reaches for Star Wars levels of display and detail – but at a comparatively bargain price.

As one of the most iconic ships from the Avengers and Guardians of the Galaxy movies, expectations for 76193 The Guardians’ Ship were always going to be high, but what the LEGO Group has delivered here is quite simply a feat of LEGO engineering Tony Stark himself would have been proud to call his own.

Of Ultimate Collector Series scale and proportions, detailing that will leave you fiddling with the endless display options on offer, and plenty of unique-to-Marvel LEGO pieces as Easter eggs to discover along the way, this supersized reimagining of the ship last seen in 76107 Thanos: Ultimate Battle will have your imagination blasting off into the Marvel universe.

76193 The Guardians’ Ship, also known as the Benatar, is a ship Marvel fans will recognise immediately from Guardians of the Galaxy and the Infinity Saga. Possessing a striking orange and grey design, and a wingspan of golden eagle proportions, it is most definitely the ship of ships to save the galaxy with. And with rock star attitude and Star-Lord charm, the merry band of guardians that accompany the set fit right at home inside.

The build itself is a relatively long one, at 30 mins a bag on average, and a total of 14 of them to get through. But with a nice mix of Easter eggs (of sorts), twists, turns and slow reveals, the build remains engaging and rewarding. Two particular highlights of note include purple bricks of Thanos hue, and the Avengers A-shaped LEGO pieces, which reveal themselves only to be concealed within the structure of the ship before you know it.

One of the ship’s more unique features include a display stand that rotates 360 degrees at an angle that allows for multiple display options, which, for a ship of this size, is useful to help you manoeuvre it into the best position for any space you have available.

A bird-like build means it has many wing-like parts (including the thrusters at the back), which can be opened or closed, spread out and angled in ways that would leave any perfectionist for symmetry constantly revising to get just right.

There are copious options for the characters inside the ship to engage with once you lift the lid, including Thor making a coffee and eating a donut, Mantis researching Gamora on-screen, and Star-Lord and Rocket navigating the ship to safety from the cockpit, to name but a few options.

It is also arguably the most orange set we’ve ever seen, short of the Weasleys’ Wizard Wheezes store in Harry Potter 75978 Diagon Alley. Whether it owns the colour or feels too overbearing will more than likely divide opinion, but there is certainly something impressive about a set this striking in colour being on display – to the detriment of all your other grey, white and black models.

It doesn’t stop at orange, though, with sand blue bricks and purple studs, among others, that make 76193 The Guardians’ Ship’s foundation as colourful as the innards of the Star Wars Helmet Series, along with the teal-coloured brick separator (there was probably already enough orange in this set for the standard version).

Talking of foundations, you’ll notice even by the third or fourth bag how sturdy and solid this set is, with the weight of its core gradually getting heavier and heavier as you continue to add to its structure. Be prepared to drop tiny studs into the interior compartment from time to time, though, and have no fear tipping up the ship to shake it out, evoking memories of shaking an acoustic guitar to free the plectrum from inside the sound hole.

One thing that is hugely appreciated with a set of this size is the equal distribution of minifigure reveals as you progress through the bags. Regardless of how much you’re enjoying the build (and you will enjoy it where 76193 The Guardians’ Ship is concerned anyway), it keeps you motivated to continue progressing through to the final bag to complete your line-up.

The 14+ designation is questionable from an ability perspective, however. It’s a challenging build, and certainly one that’ll have you mulling over instructions at different angles to make sure you have it right. That said, the very fiddly nature of kitting out the interior is definitely geared more towards slimmer, slender, or at the very least younger fingers. So, if you do happen to have a 14-year-old to hand, be sure to pass the baton over when you get to that part of the build.

76193 The Guardians’ Ship certainly has a great line-up and a generous offering of minifigures, which when compared with the recently-revealed 75309 Republic Gunship – which contains only two relatively-underwhelming characters at more than double the price tag – makes these six either new or slightly-tweaked minifigures a worthy investment.

Between extensive full-body printing on the likes of Groot (except the arms), semi-fluorescent and holographic-like printing on Mantis’s torso, and dual-moulded legs to emphasise boots on Star-Lord, it feels like the LEGO design team on this set really had some fun.

The unique-to-character moulds are welcome and entirely believable, with Rocket being a huge stand-out (if only his gun wasn’t so heavy that he can’t actually hold it without falling forward). It’s also refreshing to find the newer cape material used for Thor, with its free-flowing fabric that sits more easily under his long hair.

The only gripe some Marvel fans will undoubtedly have is the addition of a Chitauri over a Gamora, Nebula or Drax… oh, and maybe the fact that the interior of the ship is just too tight to enjoy displaying all six minifigures, their weapons and accessories.

There’s no doubt about it: if 76193 The Guardians’ Ship was a LEGO Star Wars set, it would be worthy of UCS status. The only thing missing would be the nice little display plaque and 18+ dark studio box art. But let’s be honest, sometimes a set is deserving of a little more drama in its box art, and this has it in abundance.

From Marvel minifigures designed as comic book art to an atmospheric galaxy backdrop jumping off the box right out at you, the packaging alone is worth displaying before you’ve even emptied it. If anything, it’s a reminder of just how good all those 18+ sets could look if they weren’t consigned to black boxes.

It also speaks to the attention to detail that has gone into the design of this set, from the box art and interior styling to the minifigure redesigns and tiny moving display parts of the wings and thrusters. That’s not even mentioning the elephant in the room, both metaphorically and comparatively, which is to say the size of this set.

Marvel fan or not, 76193 The Guardians’ Ship will have you wishing for more sets of this quality from the LEGO Group. Arguably one of the most well-built and displayable ships currently on shelves, the Benatar offers LEGO fans a UCS-style showstopper at half the price of its Star Wars contemporaries.

With minifigure reveals spread evenly throughout the build and plenty of Easter eggs to spot, the model keeps you entertained and eager to open the next bag, even four or five hours in. It’s also one that will leave you wanting to dive back into the movies to see the crew saving the galaxy almost as soon as your last brick clicks. (Or, better still, pop the movies on in the background and be transported away as you build your very own part of the Marvel universe.)

The playability factor is possibly the only area that 76193 The Guardians’ Ship falls down on. Yes, it’s great fun to fly around your room, and the minifigures have plenty to keep themselves busy with inside the ship – but with a cramped interior there’s really no room to swing a cat, let alone a galaxy-saving superhero raccoon. And a little thought should have gone towards ensuring their weapons don’t literally drag them down… or in Rocket’s case, face-down on the table in front of you.

Those niggles aside, 76193 The Guardians’ Ship is up there with the best display sets around. It’s movie-accurate, offers an enjoyable challenge to build, includes plenty of moving parts to tweak at your display-ready pleasure, has some Easter eggs thrown in for good measure, and its bright orange colour scheme will bring joy to any display shelf.

If you found this review useful and wish to see more, you can support the work that Brick Fanatics does by purchasing your LEGO through one of our affiliate links.

How long does it take to build LEGO Marvel 76193 The Guardians’ Ship?

76193 The Guardians’ Ship will take you a conservative seven hours to build, or an average of 30 minutes per bag, with 14 to get through. You will definitely need to be patient with this build, but the time invested in this set is worthy of the reward to see it built in all its glory.

How many pieces are in LEGO Marvel 76193 The Guardians’ Ship?

76193 The Guardians’ Ship has 1,901 pieces, which doesn’t sound that much when compared to ships from the Star Wars Ultimate Collector Series subtheme – but will take you just as long to build given the fiddly nature of some steps, with about as many bags to get through.

Including the stand, 76193 The Guardians’ Ship measures over 25cm high, 36cm long and 59cm wide. And at 1.4kg, the sheer weight of the finished model means you won’t want to be flying it around your room for too long – unless you’re eager to get creative with home workout bicep curls, that is.

How much does LEGO Marvel 76193 The Guardians’ Ship cost?