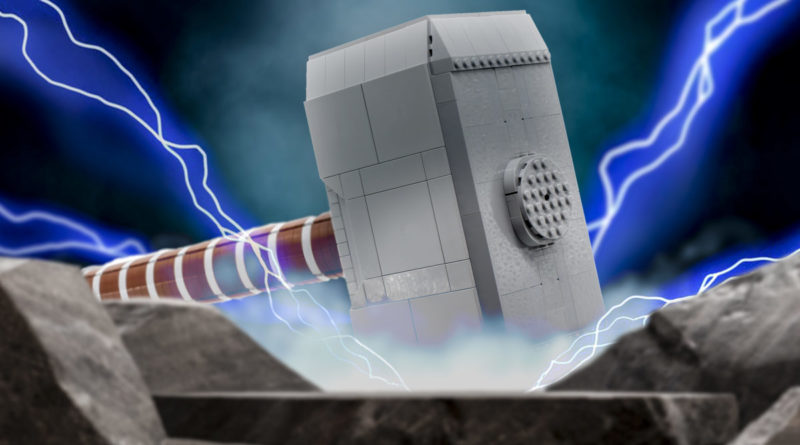 LEGO Marvel 76209 Thor’s Hammer is a surprisingly large and well-designed replica of mighty Mjolnir, but one that also feels mighty overpriced.

Thanos’s impressive and popular 76191 Infinity Gauntlet has proven that there’s a market for brick-built replicas of props from the Marvel Cinematic Universe, but while it’s certainly spectacular in design, it’s somewhat scaled down in size.

LEGO Star Wars, Harry Potter and Ideas have all offered fans the opportunity to build a wealth of sets that are based upon realistic and life-sized objects (well, as real as a lightsaber hilt or magic wand can be), but 76209 Thor’s Hammer is the first time LEGO Marvel has attempted a life-size replica of an iconic Marvel prop.

As artifacts go, you can’t get more mighty than Thor’s mythical Mjolnir, so it seems a great place to start. A model this legendary needs a LEGO set to match it, but with just 979 pieces, will the final model feel big enough to do justice to the god of thunder’s weapon of choice?

The 979 pieces required to construct Thor’s Hammer are spread across nine bags numbered one through five, as well as two bags containing a large amount of Technic bars and larger moulded pieces.

The build begins by constructing the inner core of the handle. Nine sub-assemblies built with bricks, brackets, plates and Technic bars form a fairly sizeable and impressive structure, and any fears that this war hammer wouldn’t measure up are immediately dispelled. Even at this early stage, you can tell this is going to be one large model. The inner core feels massive in the hand, and already it’s developing quite a hefty weight. It’s actually a really exciting start, and builds anticipation for just how big the hammer could actually be.

The handle is built from an even more impressive 112 brown and 44 light grey 1×4 curved slopes. Normally a review wouldn’t be so focused on the exact number of parts used in a build, but when the count of a particular piece is so high and used to such great effect, it’s worth mentioning. The handle looks and feels brilliant, with the light grey simulating a realistic metal band around the authentic wood effect created by the brown elements.

A build that repeatedly uses large quantities of the same part over and over on paper seems like it could be quite dull and repetitive, but 76209 Thor’s Hammer defies expectations. There’s just such a magical feeling about building such a memorable and sizeable movie prop, and with each stage the set continues to grow into an ever-more-impressively large model.

The hammer head is inevitably a very square design, but one that is surprisingly enjoyable to put together. Inside is a frame with studs facing out in every direction. Tiles are built around the exterior covering the frame, with each end sloping inwards to give the hammer its distinctive shape.

Brick-built lightsaber hilts and magic wands feel great in the hand, but there is something so much more mighty about the LEGO Mjolnir, and fittingly so too. Picking it up really makes you feel like a superhero wielding a mighty weapon: it’s solid, robust, heavy to hold and big.

But like the old saying goes, size isn’t everything. While the hammer is built to an impressive scale, it is somewhat lacking in the finer details. From first glance and from a distance Mjolnir looks very impressive, but on closer examination you’ll soon notice it’s just one solid block of colour with very little, if any, detailing. The on-screen hammer is adorned with engravings, carvings and markings that are just completely absent from this set, which really takes away from the final model. It just looks a little too basic in the end.

This is perhaps partly down to the colour choice. Light grey is a very common colour, and so helps to keep the cost of an already fairly expensive set down. However, flat silver – or even drum-lacquered silver, if we’re dreaming big – would have been a much more eye-catching and appropriate colour. Just think how stunning a model this would have been if it had the same display appeal and finish as 76191 Infinity Gauntlet.

There’s also a brick-built base to perch the hammer on, and there are some smart design techniques going on once these parts are placed together. Hints of fizzing lightning sparking over the ground connect to a pair of turntables, which allow Mjolnir to sit at an otherwise unachievable angle. It’s all rounded out by tiny representations of The Eternal Flame, The Infinity Gauntlet and the Cosmic Cube (which is actually a really neat piece), referencing Thor’s appearances in the MCU.

With no way to actually connect the hammer to the base it does feel a little too delicate, however, as the slightest of knocks will send everything flying (in stark contrast to the movies and comics, where only the most worthy are able to even slightly nudge Mjolnir). And as fun as the build is, it feels like it’s over too quickly for a set of this size – while there isn’t anything radically inventive or unique about the techniques on display, either.

An exclusive version of Thor is included with the set. His double-sided face print is excellent, with the smiling expression really capturing the look of Chris Hemsworth perfectly, and the alternative side looks superb too. The torso is a new print, based on his Infinity War costume, which looks good but conflicts slightly with the length of Thor’s hair – on-screen his hair is much shorter.

His legs don’t have any printing at all, and for an exclusive minifigure in a set priced over £100 it feels like a real missed opportunity to give us the definitive Thor minifigure. As it is, it’s good, but could have been great.

This is where 76209 Thor’s Hammer’s real issue lies. Through recent 18+ sets, we’ve come to expect a high level of accuracy and an inventive build that includes techniques we’ve not seen before. This model doesn’t feel detailed enough and the build doesn’t feel involved enough to warrant such a hefty price tag.

Fans in the US have it slightly better (only just), but those of us in the UK and Europe are looking at a set that’s over £100 / €100. There are fewer than 1,000 pieces in the box, and the Thor minifigure doesn’t quite feel desirable enough to justify that price.

While there is something incredibly entertaining about swinging a LEGO model around like a superhero, that appeal is slightly lost when you remember how much you’ve spent to have the pleasure of doing so.

76209 Thor’s Hammer is an excellently-executed set – it’s just lacking some final detail that would have elevated the entire model. A squared-off hammer is admittedly not the most complicated of shapes to recreate using LEGO as a medium, but it’s nonetheless very well accomplished.

Marvel fans will no doubt absolutely love watching this iconic and important artefact from the MCU come to life, and get a real kick of swinging it around pretending to be the god of thunder himself. It’s such an enjoyable build that even casual fans will get a lot out of this set.

The problem is the price: it’s just too expensive for what you get. The build is over relatively quickly, and that’s never a good sign when a set is priced over the £100 mark. The Thor minifigure is decent, but could have been better and because of the plain design of the hammer, over time the set does start to lose the wow factor that hits you when Mjolnir is built for the first time.

Overall it’s a decent attempt, but the plain design and high cost means this is one set that isn’t quite worthy to be bestowed with the power of Thor. However, if you ever see it discounted it’s definitely one to pick up – if you can, of course.

How long does it take to build LEGO Marvel 76209 Thor’s Hammer?

For a set that costs over £100, the build for 76209 Thor’s Hammer is over relatively quickly. Expect to put aside around two hours to complete the entire model.

How many pieces are in LEGO Marvel 76209 Thor’s Hammer?

76209 Thor’s Hammer contains 979 pieces. There are a few occasions where multiple elements have been used repeatedly, such as the exterior of the hammer and handle.

This is where 76209 Thor’s Hammer really shines. It is impressively large, measuring 46cm high and 29cm wide.