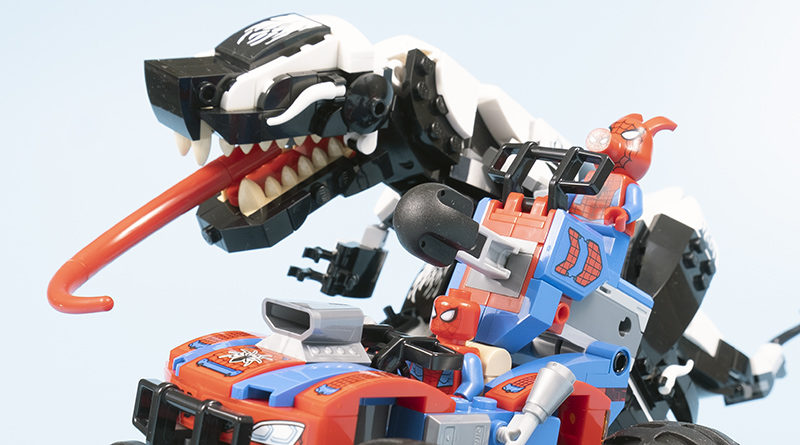 The fan-favourite enemy from Old Man Logan is the focus in LEGO Marvel Spider-Man 76151 Venomosaurus Ambush, even outshining the inclusion of a Spider-Ham minifigure.

While the Marvel and DC movies tend to be tentative about the various comic book concepts they introduce audiences to, the LEGO Group’s approach varies from year to year. Sometimes, the sets follow the more ‘grounded’ film universes closely, while on other occasions they go wild and enjoy the full strangeness that comic books have embraced for years.

In 76151 Venomosaurus Ambush, the design team has taken inspiration from the Venom T-rex introduced in Old Man Logan, but placed it within the Spider-Man universe (Spidey is the best-selling of the Marvel characters when it comes to toys). Rather than incorporate a jeep with Logan and Hawkeye, the set includes a chunky 4×4 for Spider-Man, Spider-Ham and Iron Spider to face off against Venom in.

Those who built last year’s wacky brick built dino in 75938 T. rex vs Dino-Mech Battle might have some idea of what to expect this time around, but the build process has fewer similarities than fans would expect. It starts off with the central section, with click hinges and Mixels joints attaching the limbs to the main body.

While the main body of the rex is fairly simple, the head is much more intricate. Different slope and tooth elements are used to capture the shape of a T-rex’s head, creating the right angles to also give the creature some character. It doesn’t match the comic book exactly, but the head definitely evokes the way it appeared in Old Man Logan, right down to the creepily long tongue.

The shaping of the legs is excellent, with black web elements used on the knees to add to the spider-y, Venom-y feel of the model. The feet tilt from side to side, which helps with getting the beast in dynamic poses. There are limitations on this due to the weight distribution, as the build will just tip over in certain positions.

Where the designers have deviated from the source material and seem to be confusing their own story slightly is that the back of the Venom T-rex opens up to reveal what seems to be a mouth. The Venom minifigure fits in there, suggesting the character has transformed into the dinosaur. Given that there is also an egg in the set, with a syringe next to it and a Venom arm creeping out, it seems to contradict the notion that the beasts are hatching. That said, it is impressive how snugly a minifigure fits in there.

Black and white models look particularly striking, which is certainly the case here. There are nice details to capture the creeping nature of Venom, such as the horn element. The stickers contribute a lot here too, requiring some very careful aligning. There are a lot of them in this set, but they are necessary to capture the Venom-ness of the dinosaur.

Moving over to the Spider-Man 4×4, it’s a very different type of build. It is garishly coloured in blue and red, with the cartoony vibe that is typical of LEGO Spider-Man. It matches up well with the Spider-Man and Spider-Ham minifigures.

There are lots of stickers on the buggy as with the T-rex, but they feel less necessary, which is a little frustrating. The car features decent suspension thanks to rubber bands, allowing it to be pushed down close to the ground before springing back up when touched. It has space for a driver and a minifigure at the back to operate the rocket launcher.

Spider-Ham is the minifigure that will pull fans into this set. The character is almost 40 years old, but got a new lease of life after appearing in Spider-Man: Into the Spider-verse. Now, fans can add a LEGO version to the collection. A nice moulded head closely follows the digital design used in LEGO Marvel Super Heroes 2, with detailed printing featuring snout holes as well as eyes. The torso matches the one used for regular Spider-Man.

Iron Spider has been released before as a minifigure, but this version features more detailed printing than previous editions. The gold spider logo covers fainter printing that represents a spidey suit. What’s really neat is that the fainter printing is on the head as well as the torso, making for a very cohesive minifigure.

Venom matches up to the character’s box-mates, with a creepy face print. The character’s accessories are great – a back piece attaches via the neck, which allows for four addition arms to be connected. The various spider accessories are provided in black, so Venom can be wielding all manner of weaponry.

The Spider-Man found here was introduced last year, offering a nice, clean regular edition of the character. While there’s nothing new, there’s nothing that needs fixing either.

Given the size of the Venomosaurus, the price for this set feels a fraction too high. Fans would have probably been happy to have had it cost a bit less and omit the buggy, but then the exclusive Spider-Ham minifigure would have been harder to justify. As it is, there is enough in this box – particularly Venomosaurus, Spider-Ham and Iron Spider – to ensure that Marvel fans don’t feel too short changed.

As a popular entry in the Marvel canon, fans will be delighted to build the Venom enhanced dinosaur. It requires a little balancing to pose dynamically and requires quite a few stickers to complete the design, but it does have a nice shape and some excellent detailing. Given that it is not something that the LEGO design team are likely to revisit, fans should take the opportunity to get the set while it’s on the shelves. Spider-Ham, Iron Spider and kitted out Venom minifigures make the deal all the sweeter, even if the buggy does nothing but increase the piece count.

76151 Venomosaurus Ambush is available now at at LEGO.com. You can help support Brick Fanatics’ work by using our affiliate links.