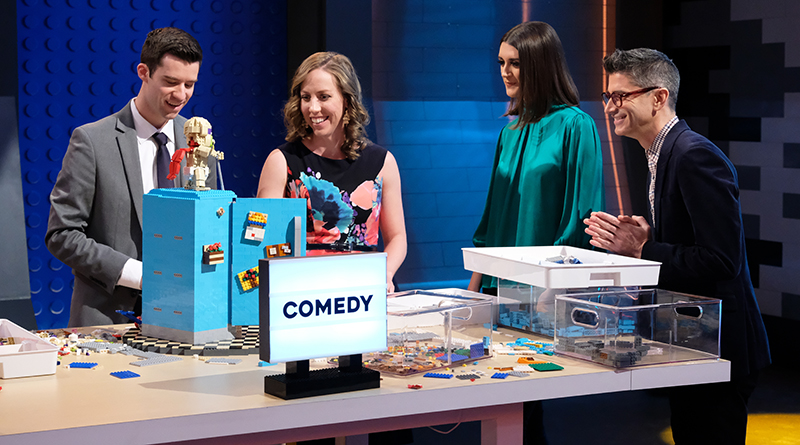 Things get tough for the remaining LEGO MASTERS USA builders in the fourth episode, as they must build something that represents a specific movie genre. There is a tight time limit that proves difficult for some, but then the addition of a twist means that only the most adaptable builders are able to succeed.

To add a bit of cinematic flair to the proceedings, The LEGO Movie writer/directors Phil Lord and Chris Miller pop in to reveal the twist. They spend time chatting to the contestants and checking their progress along with the LEGO Batman they cast – Will Arnett.

As ever, Arnett proves an entertaining host as he continues to interject the proceedings with little skits and off-kilter jokes. A little time was spent with judges Amy Corbett and Jamie Berard, as they checked in on the teams and gave them useful advice.

This really is the toughest task yet, firstly due to the randomly assigned movie genres. When this challenge was featured in the Australian edition, the builders could select a scene from an existing film and put it together – here, the builders have to take their assigned genre then build a scene that represents that genre with a decodable story. It is a tricky task, but then the twist that means everyone has to add another genre makes it near impossible.

Boone and Mark pulled off something cool this week, managing to mash up the monster genre with the romance genre successfully. Their shark monster was not quite perfect, but given the time constraints, certainly good enough to pair with their impressive minifigure scale scene. It really did look like a moment from a film.

Once again, Tyler and Amy excelled by putting together a really sharp, polished scene. The monster twist that they were given was easy to add to their existing model, which meant that the finished scene looked excellent.

Flynn and Richard seemed to get off lightly, having built a relatively simple model. While the story was clear, their building skills did not seem to have been stretched. By contrast, Christian and Aaron put together an incredible build, but were critiqued for a lack of clear story – they seem to have been coming in for some particularly harsh criticism since the first episode.

Unfortunately, the wonderfully emotional Manny and Nestor were knocked out after this round. Their neat saloon build did not sync well with the spaceships they build for the fantasy side of their mash-up. It is a shame they have to go, as the audience has not got to know all of the contestants yet, and this pair felt a little more open than some of the others.

Next week will see a return to minifigure scale for everyone, which could make things very interesting.