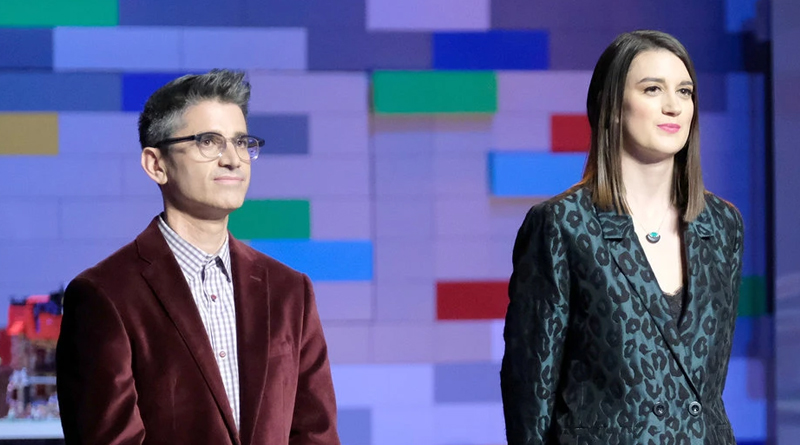 Amy Corbett is one of the two judges on LEGO MASTERS USA, bringing her wealth of LEGO design experience to the Build Room

LEGO MASTERS is bringing the competitive brick-building television series to the USA for the first time, with 20 LEGO builders facing tough challenges that will push their skills to the limit. Someone needs to see how they are faring, provide advice and select the winners each week – and that is Amy Corbett’s role.

Amy, who has just launched the LEGO DOTS theme on which she is the Design Lead, is judging the competitors alongside Design Lead Jamie Berard. The pair swapped out their Billund offices for a Hollywood stage to take on their roles as ‘Brick Masters’.

In this exclusive interview, Amy explains what will be expected of the contestants and the challenge that she most enjoyed.

What is your background at the LEGO Group?

I started seven years ago with LEGO in LEGO Friends. It was quite shortly after LEGO Friends had launched so we were still establishing the brand, and as a designer and I was there for a few years. I moved onto The LEGO Movie 2 in the concept stage, when the story was still being developed, working on some of the first products there.

Then I had the opportunity to become a Design Lead so from there I was the Creative Lead on LEGO Disney, running the team on the Disney line, the kids’ focused Disney products.

I moved from there onto a small project called DOTS that has now become the big launch that we had this week. So I have been secretly working on that project for two and a half years now actually. I am the Design Lead on that project with a team of 10 designers, so it is very exciting to this week finally share that with the world. I have had quite a journey at LEGO, working with IP (intellectual property) and homegrown with LEGO Friends, but something that had already started, and then working now to start something from the ground up and launch it.

What are you looking for from the contestants?

We had three key criteria that we used throughout the show so that we always had a focus on what we were looking for from every challenge. Those were always creativity, so what kind of ideas the teams would come up with around the challenges and how they would creatively use the brick to shape those ideas, technical ability, so how much experience did they have in using the bricks and knowing how they could push the system, also knowing how they could support these huge structures, then it was storytelling, so how could they really bring the models to life through storytelling.

Most of all we were looking for originality, we wanted to see things that we hadn’t seen before and we wanted to be surprised and wowed every time. We definitely were, throughout the competition.

Was there a challenge where the teams really exceeded your expectations?

I think the challenge for me that was most fun perhaps was the smash challenge when we asked them to design something knowing that it is going to be blown up or exploded or destroyed. That pushed a lot of the LEGO fans out of their comfort zone, so that was quite surprising and interesting.

Have you ever built something to be destroyed?

I have to say I have never built something intentionally to be smashed, I have very often dropped things in the past and had a very tragic smash or destruction, but I have never built something to be smashed. So of course these are huge challenges that we are giving the teams every week, they are very different to some of the things we are doing in the day to day product development.