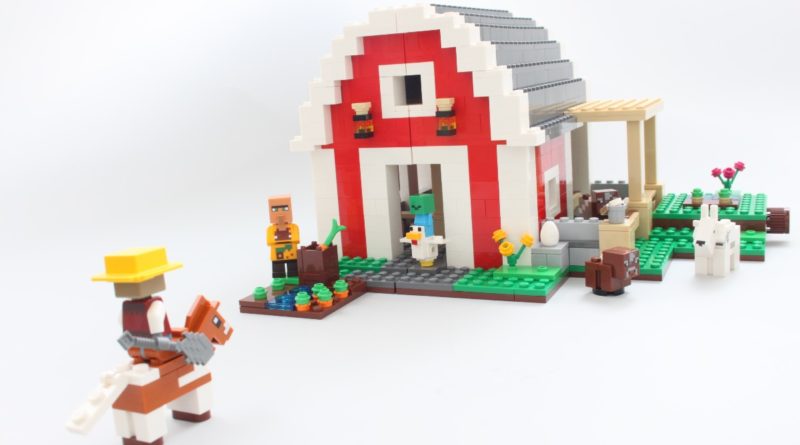 The new LEGO Minecraft 21187 The Red Barn presents a concept rarely seen in bricks, just in time for a fresh farming subtheme – but at a cost.

A classic staple of farms in media is the simple red barn, but such a structure has never been represented in System LEGO sets before – at least not until this Minecraft summer 2022 set. While DUPLO has released more than a few red barns over the years, minifigure-scale farms have gone without one officially, and even this summer’s CITY farm sets don’t quite nail that classic red-walled colour scheme.

21187 The Red Barn achieves something that no other LEGO Minecraft set has managed to so far, presenting a build that can fit in farms beyond the theme with few minor modifications – though this charming model comes with a high price.

Using almost 800 elements, the majority of 21187 The Red Barn’s part count goes into the barn itself, and to great effect. You simply can’t go wrong with the classic white and red colour scheme that the model uses, with fences and walls filling in necessary gaps without feeling out of place. Unlike other LEGO Minecraft sets, there’s no especially bad angle to look at this build, though viewing it with the grass patches in front will be preferred.

The curved but block-based roof of 21187 The Red Barn is surprisingly structurally-sound and immediately draws your attention, with curves not being a typical inclusion in LEGO Minecraft. The natural shape of the roof, within the design constraints of Minecraft, still allows it to be placed alongside other LEGO farming models without feeling too out of place (and a few simple slopes will bring it to life even more).

Unfortunately, the exterior farming space in 21187 The Red Barn is lacklustre to say the least, with space for only six crops to be planted and one pen for animals to roam in. You could let the included animals roam freely, though such a tactic isn’t recommended in the open world of Minecraft. The potatoes can instantly grow with the turn of a handle, which makes for an especially fun feature, even while there’s no bone meal included.

Considering the cost of 21187 The Red Barn, enough additional pieces to wrap the grass area from the front around to the side of the build would have been greatly appreciated. The barn itself can be folded open, with a Technic cross-axle ensuring that it stays tightly closed when not in use. This small feature will come in handy for those moving the set around frequently, or even just from the table to the shelf after construction.

Inside the barn, you’ll find enough space for two animals, an area to work, a place to store items in the upgraded and more accurate chest element and somewhere to live. All of this assists in making the barn feel like a home for your Minecraft minifigures, rather than just for the animals. The dollhouse-like nature of the model lends itself well to playing with the creation, and the design for the roof ensures that there’s more than enough space for even a sunhat-wearing villager to stand.

Two minifigures are included in 21187 The Red Barn, though most of the featured characters are animals, fitting with the farming aspect of the model. In terms of traditional Minecraft minifigures, the Rancher and Jungle Villager use new designs as well as a fresh brick for a sunhat, ready to be equipped on a LEGO Minecraft head in the same way as a traditional helmet.

This new piece might feel unusual, but rest assured that it is from the base Minecraft game, as all farmers come equipped with one to shield them from the sun. Of course, the beauty of LEGO Minecraft means it can be worn by any of the minifigures, including those with a slightly smaller, undead head.

Beyond those two minifigures, brick-built figures for a cow, calf, horse, chicken, Baby Zombie and the new goat are included too. This wide selection of animals and enemies furthers the value of 21187 The Red Barn, with the Baby Zombie, horse, goat and chicken all featuring specialised elements.

The goat is new for the summer 2022 wave after being added to the game almost one year ago on June 8, 2021. The inclusion of an angled head makes for fun posing opportunities as they ram minifigures into the sky.

Unfortunately, £89.99 / $99.99 / €99.99 feels just too high for 21187 The Red Barn, given the relatively small ground it covers on the base. Had it been slightly cheaper, it would have been far easier to recommend. As it stands, you won’t be too disappointed in 21187 The Red Barn for the asking price – and even less so if you find it on sale – but a bit more space for a farm using relatively few elements would have made the high price tag far more understandable.

Anyone planning to make a full farm display using the new LEGO CITY summer 2022 sets, or any other models you might have on hand, will want to keep their eye on 21187 The Red Barn as this simple structure is overflowing with charm and a design that is relevant beyond the world of LEGO Minecraft. For those who are focused on the theme, it’s a worthwhile addition to your collection with a wide variety of figures to populate your world – so long as you can cope with the high price.

How long does it take to build LEGO Minecraft 21187 The Red Barn?

Though the build might get slightly repetitive at times, you’ll only need to set aside an hour and a half to construct 21187 The Red Barn.

How many pieces are in LEGO Minecraft 21187 The Red Barn?

799 elements are included in 21187 The Red Barn. You might wish that just one more was included for a satisfying round total, but that’s sadly not the case.

How much does LEGO Minecraft 21187 The Red Barn cost?