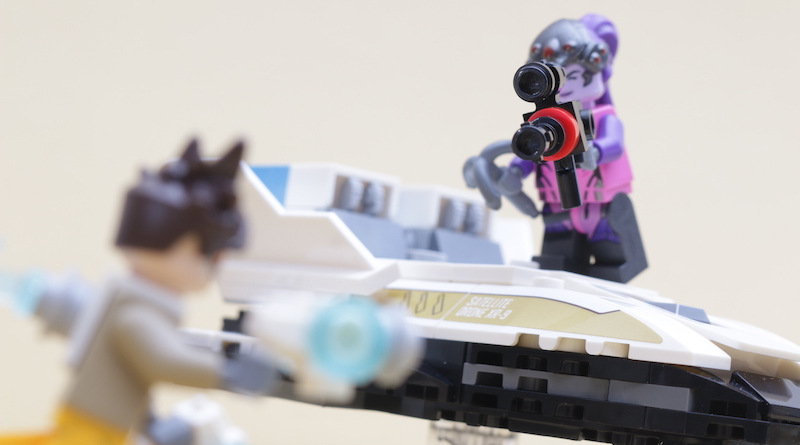 75970 Tracer vs. Widowmaker contains two of the most sought-after minifigures in the LEGO Overwatch range, plus a surprisingly good build

Tracer and Widowmaker – eponymous stars of 75970 Tracer vs. Widowmaker – share a lot of history in the Overwatch universe, dating back to the early animated trailers and taking in rooftop chases and comic book clashes along the way. Time-jumping Cockney cover star Tracer is the ever-chipper face of the franchise, while femme-fatale Widowmaker has inspired countless cosplays/dubious fan-art over the years. It seems a bit of a no-brainer to package the two together in the entry-level set for the new LEGO Overwatch range, with their respective minifigures likely the main draw for many fans. 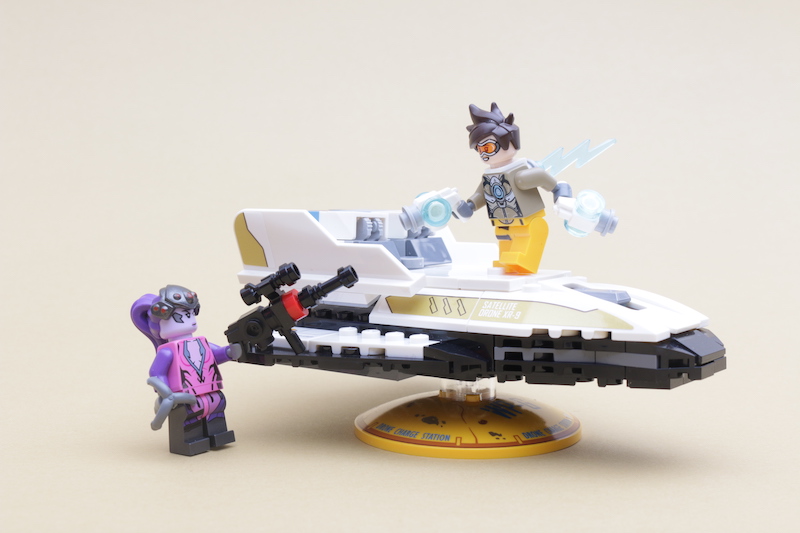 Tracer’s iconic quiff sits upon a dual-sided head giving the option of a smirk or full on grin. The torso is intricately detailed, although a brighter blue would have really made the trademark Chronal Accelerator on her chest stand out. With the choice of an icy stare or a menacing wink, Widowmaker’s true crowning glory is her striking headwear.

The Overwatch minifigure designers are rightly proud of the new headpiece sculpts in this range and the level of detail on the arachnid-like visor and flowing ponytail captures the assassin’s graceful and deadly nature perfectly. The versatility of the new blaster piece – designed specifically for LEGO Overwatch – is showcased here in the form of a slender, elegant sniper rifle that differs sharply from the short, stubby weaponry wielded by her adversary, despite sharing the same foundation.

In hand, the Satellite Drone payload is a sleek piece of hardware that is much more recognisably A Thing than the slightly characterless alabaster shape suggested by the preview photographs. The gleaming white fuselage contrasting with a black underbelly echoes the classic NASA Space Shuttle colour scheme, but applied to the sort of high-tech concept orbiter seen in any number of Silicon Valley tech company visualisations.

Two unapologetically boxy and utilitarian boosters lumped on top of the tail end speak of a vehicle that balances form and function into a cohesive whole. One can definitely imagine it having been dreamt up in inventor/full-time-gorilla Winston’s workshop, between jars of peanut butter. Gold accents pop with sticker applications and give the finishing touch to a model that is far more visually interesting than initially expected. Nice work, LEGO.

The speedy build is nothing out of this world, consisting as it does mainly of smooth, plain white panels and curves, although the drone can be presented in one of two ways: The game-accurate, unmanned version befits recreating the chaotic escort missions fought over its virtual incarnation, or; for a less bumpy ride, the second option is accessed by removing a couple of panels on top and revealing the hidden cockpit and control setup, ready for a hero to serenely pilot the payload to its destination (if only it was that easy in the actual game, AMMIRITE!?). Although I prefer the form more faithful to the game, I appreciate the thought that has gone into adding the extra level of play value.

Rather than merely being an accessory for the larger 75975 Watchpoint: Gibraltar set that it is easy to assume that it would be, the Satellite Drone pleasantly surprises by working as a fun model in its own right. Add to that, two very desirable minifigures at a price that won’t break the bank and 75970 Tracer vs. Widowmaker is a great value package that will probably still appeal more to Overwatch devotees than general collectors, but should be not be overlooked for anyone who is just a fan of neat, well-executed LEGO sets.

75970 Tracer vs. Widowmaker is available now at shop.lego.com. You can help support Brick Fanatics’ work by using our affiliate links.