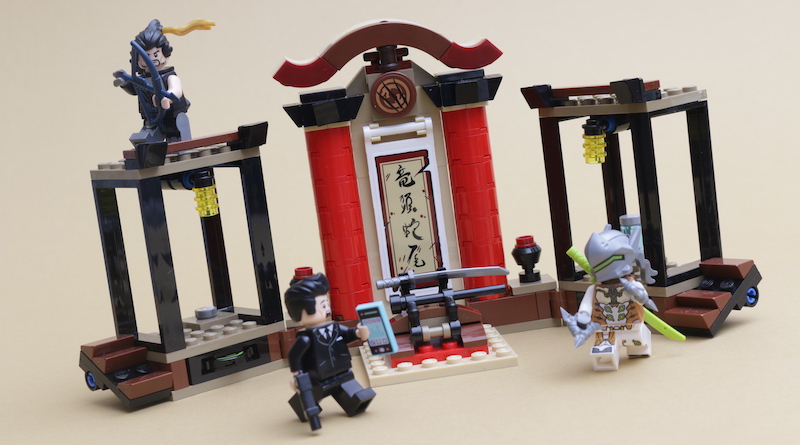 The LEGO Overwatch design team immersed themselves in all facets of the Overwatch universe – one which extends far beyond the game into cinematic shorts, comic books and a devoted fanbase – when determining scenes to recreate in brick form. The shrine that serves as the setting for 75971 Hanzo vs Genji is steeped in Overwatch lore as the location of the second capture point on the Hanamura map as well as an emotional reunion/showdown between the titular brothers in the Dragons animated short. 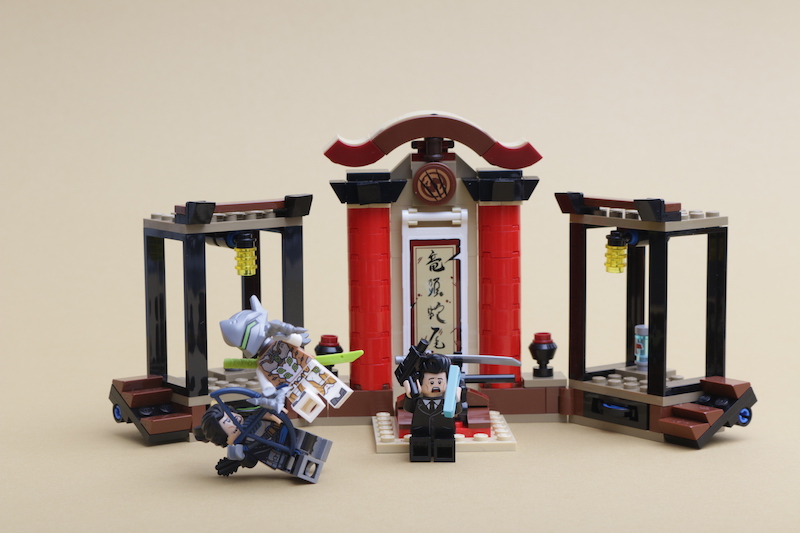 Minifigure-wise, Hanzo’s brand new hairpiece and stern features are fitting for the aloof archer – and removing ribbon from the man-bun provides the ‘hipster barista’ accessory you always wanted. Sadly, the torso suffers from a lack of contrast on the printed elements, making it somewhat difficult to pick out individual details. The classic bow and quiver combo completes the package. Genji fares much better, with his spot-on helmet, intricate printing and vicious shuriken. His lime green Dragon Blade really pops and is the perfect foil to his brother’s deep blue Storm Bow.

Building the shrine is an exercise in adding height using round bricks and window frames. Some interesting variation comes in the form of the curved roof structure, comprising macaroni pieces turned on their side. Angled slope pieces create two sets of steps at either end that, along with the incense burners and hanging lamps, add further visual links to the game model. Extra interaction comes by way of the hidden disc launchers beneath the two platforms that flank the shrine. The included dragon-printed discs, coloured green for Genji and blue for Hanzo, are a nice touch that doubles down on the duel theme.

75971 Hanzo vs Genji does not offer the most complicated build, but this is a set where the build feels secondary to the fan-pleasing details that tell the story around it. The battered banner bears the scars of the brothers’ battle, while the carefully balanced katana provides a moment of stillness in the chaos. The third minifigure in the set – and the only non-hero figure in the entire Overwatch range – is the unnamed, panicked security guard clutching his phone and machine gun. Pulled straight out of his brief cameo in Dragons, he is certainly, what I believe the kids call, a deep cut.

The small size and uncomplicated build means that Hanzo vs. Genji may not immediately appeal to general LEGO collectors. However, the way in which key design elements from the in-game map have been taken and simplified into this neat, self-contained vignette is a lesson in economy of design. Meanwhile, the obvious care that has gone into bringing to life the story of two of the game’s most tragic heroes will delight Overwatch fans, who certainly won’t be drag-on their feet to get their claws on this set. I’ll see myself out.

75971 Hanzo vs Genji is available now at shop.LEGO.com. You can help support Brick Fanatics’ work by using our affiliate links.