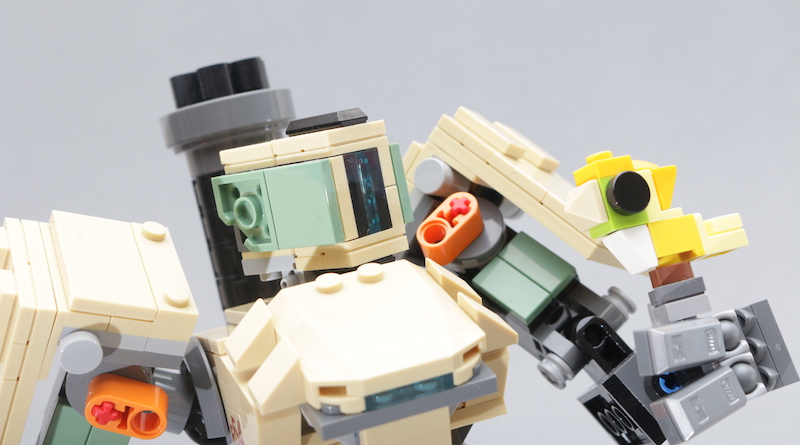 With the unique ability to transform instantly from robot to minigun emplacement, Bastion is one of the most recognisable heroes of the Overwatch universe. While this talent is handy for clearing a busy capture point of rivals, it presents a tricky challenge to the designers of LEGO Overwatch 75974 Bastion, the large-scale incarnation of the peace-loving sentient robot.

The build experience is an inside-out affair, starting with the torso and gradually adding limbs, armour and weaponry as a fully-formed robot reveals itself. Intentional or otherwise, there is a suitably ‘assembly line’ feel to a robot that was mass-produced during the Omnic Crisis (the human/robot conflict that informs the history of the Overwatch universe). Only, instead of wing mirrors and bumpers, it’s machine guns and ablative plating.

Although there is ample use of plain square and rectangular bricks, clever use of well-placed circular plates and studs create the illusion of joints, gears and further gubbins, without clogging the model up with too much detail. In this way, there is no compromise to stability and sturdiness in the chunky lower portions.

In Recon Mode (Bastion’s upright, humanoid configuration), the in-game Bastion is not an agile machine, and the designers have done a fantastic job of capturing the weight and sheer stompiness of a hero that clumps rather than glides around maps. Beefy, ratcheted limbs allow a range of poses that bring to life what could easily have been rigid and inexpressive.

While the earlier, smaller 75987 Omnic Bastion release missed the mark slightly with its ‘facial’ likeness, the larger model hits it perfectly with a spot-on recreation of his cyclopean mug. A hidden red Fx Light that switches the colour of Bastion’s eye when he snaps into combat mode is the sort of Easter Egg that reflects the design team’s fan-pleasing immersion in Overwatch lore.

Collapse the legs and twist the torso and, like magic, the squat, implacable form of Sentry Mode appears. In practice, it’s not the most complicated of transformations, but nevertheless it works seamlessly and it’s a credit to the designers that such a dramatically different appearance is achieved. It is instantly identifiable from its in-game version and the impressive firepower on display will send a shiver down the spine of any Overwatch player who had the misfortune to assault a payload that was guarded by our bullet-spewing friend.

While it may not match 75975 Watchpoint: Gibraltar in terms of piece count and price tag, in many ways Bastion feels like the headline set from a LEGO Overwatch range that is not short of big guns. It’s obvious the care and attention to detail that has gone into a model that will look fantastic on a shelf, but equally just begs to be picked up and played with. Double the modes is indeed double the enjoyment, with two distinct modes that individually would get into most collections on their own merits. Add an intuitive and fun transformation in-between and the only dilemma will be deciding which mode to display it in when you finally put it down.

75974 Bastion is available now at shop.lego.com. You can help support Brick Fanatics’ work by using our affiliate links.