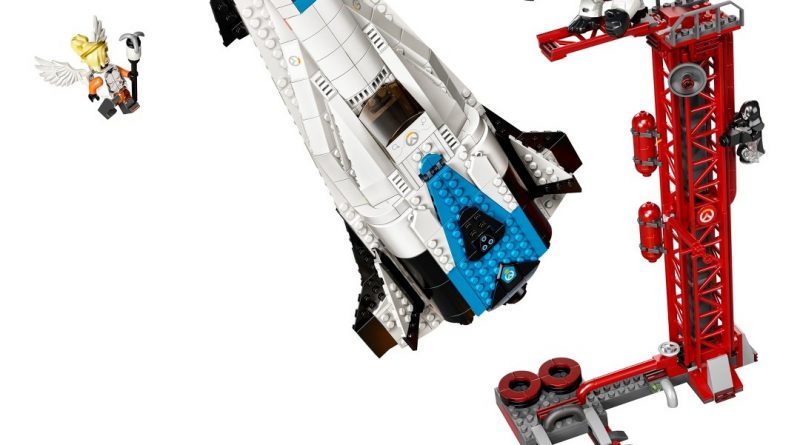 The largest LEGO Overwatch set – 75975 Watchpoint: Gibraltar – combines with the smallest to represent one of the game’s most epic missions

LEGO Overwatch covers it all – dojos, pink mechs, trucks – and spaceships. 75975 Watchpoint: Gibraltar is a distinctive set in the theme, featuring an Overwatch rocket, launch tower and of course Winston.

LEGO Model Designer Woon Tze Chee is part of the team that developed the Overwatch range, and in this exclusive interview, explains how the largest set in the range was designed.

How was 75975 Watchpoint: Gibraltar developed?

Mark Stafford did the model, but every week we would have a design meeting and we would go around the table, talk about the models, share ideas and make suggestions about how you can improve the model.

In the animation Gibraltar is where Winston’s secret base is and that is why we have him in that set. This mission is to launch the drone. The pharmacy combo came about because of the height of the model, the core model, we know we can make use of the height in the box and showcase some of the flying characters. We wanted the pharmacy combo because again we want to speak to fans of the game and we know it is very popular, some people may find a lot of difficult dealing with this combo so it resonates well with them.

In terms of the scale you settled on, how did you settle on this size? Could it have been bigger?

I wouldn’t say you could go any bigger, if you just reference all of the other models within the company for all the other franchises, we generally know how big certain sets should be when we talk about it. If someone came up with idea of a spaceship for this particular character, then we roughly know how big the spaceship should be, that is generally how we go about it. We kind of have an idea of how big it should be.

I guess it’s experience. For someone like me who has only joined the company about three years ago, I wouldn’t necessarily have the experience, but you have enough reference from around the company to know roughly what size it should be.

Did you always intend for the set to combine with 75970 Tracer vs. Widowmaker?

I think that idea came up quite early. I think there was a few ideas that started off with this set, so we wanted to make a small price point so we know there are probably two minifigures in there. It kind of generated from this one – wouldn’t it be cool if the first one connects with the last one? Then you can play out the story, move the payload right to the end and it connects to it. It is a very fluid sort of process.