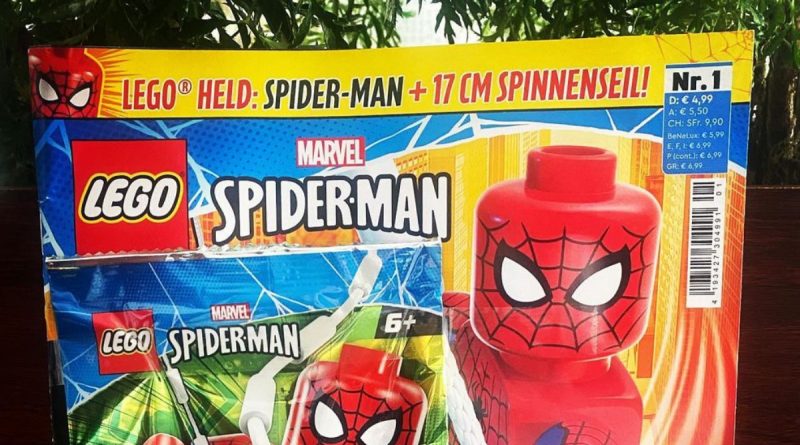 An official LEGO Spider-Man magazine is joining the longlist of print titles with free foil-bagged minifigures – but you can probably skip the first issue.

That’s unless you’re one of probably two people who don’t yet own the most basic of LEGO Spider-Man minifigures, which is the inevitable free gift with the new title’s debut issue. Instagram user stonehunter82 found a copy of the first LEGO Marvel Spider-Man magazine in Germany, where it’s published by Blue Ocean Entertainment – the same company behind the LEGO Star Wars magazine, LEGO NINJAGO magazine and so on.

It couldn’t have been anyone else but Spidey on the front cover of Issue 1, of course, but did it really have to be this Spider-Man? The comic book variant of the minifigure has so far appeared in six LEGO Marvel sets, including 76175 Attack on the Spider-Lair, 76219 Spider-Man & Green Goblin Mech Battle and 76173 Spider-Man and Ghost Rider vs. Carnage, and can be had for as little as £1.53 on BrickLink.

That reduces the appeal of the LEGO Spider-Man magazine for adult fans by some distance, and while we’re obviously not the target audience for these titles, here’s hoping future issues include rarer – or at least more interesting – characters and variants, in the same way as the LEGO Star Wars magazine.

According to comments on Instagram, Issue 2 will come with Carnage, as seen in 76173 Spider-Man and Ghost Rider vs. Carnage. (Is there a huge supply of unsold copies of that set sitting around in a warehouse somewhere?) The symbiote is at least slightly more valuable than Spider-Man, and will hopefully include his brick-built tentacles for good measure.

Given these titles tend to appear a month earlier on the continent, we can expect the LEGO Spider-Man magazine to reach UK shores in August (if Immediate Media is bringing it here at all, that is). You know, if you really need another Spider-Man minifigure…