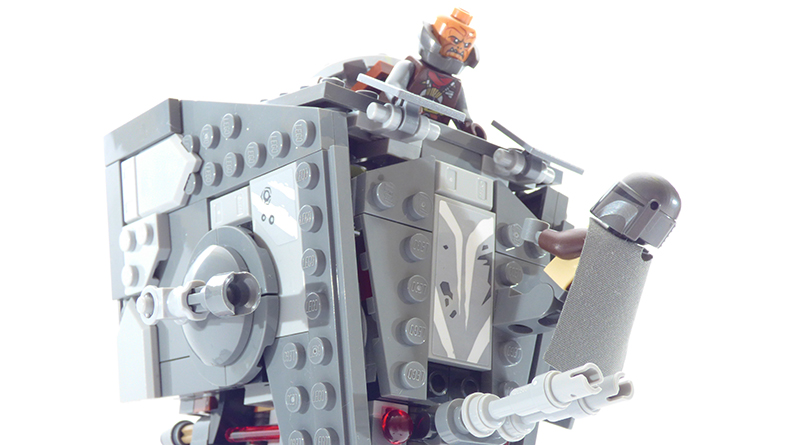 The AT-ST is back, in the only LEGO Star Wars set based on Star Wars: The Mandalorian. Is 75254 AT-ST Raider as desirable as Baby Yoda? Find out in the Brick Fanatics review…

LEGO Star Wars 75254 AT-ST Raider is the sole set based on Star Wars: The Mandalorian, the new series available to watch only on Disney+. While it is a familiar classic trilogy design, its particular appearance in this set reflects that it exists in a post-Return of the Jedi era, when old Imperial tech is lying around and waiting to be commandeered.

Star Wars: The Mandalorian introduces new worlds, new characters, new vehicles – so where does the sole LEGO set based on the series go? To the AT-ST. a vehicle that has been around since 1980. Admittedly, this is not the Chicken Walker as fans know it, as it has been adopted by a bunch of Klatooinian raiders.

Anyone who built 75153 AT-ST Walker (review) will find this a familiar experience, as the build is very, very similar. That is no bad thing, given that the Rogue One: A Star Wars Story edition of the vehicle provided a very accurate version of the machine that is pretty much in the correct scale with a minifigure. Given that the main action that the AT-ST Raider features in sees the machine face off against people, scale is important.

The highlights in this set can be found first in the head, where the shaping of the entire section feels right. All of the guns, which are found at the chin and on the sides, are well executed and have the correct Imperial feel that this vehicle demands. The entire top section lifts up for very easy access, while the hatch can also lift alone for minifigure access and display purposes.

What does differentiate this edition of the walker is the colour scheme, with brown and red elements illustrating that the vehicle has been patched back together a bit. This is most apparent in the legs, but is also the case in the middle section, which deviates from 75153 a bit more. It is also here that a dial is found on the back, which can be used to turn the AT-ST’s cockpit.

As was the case with the previous release, the legs on the model are not great. They are fine in the static, upright pose and incredibly stable – but they have no range of motion whatsoever, so the AT-ST cannot be posed as if it is walking or even have its position adjusted. It really is a shame that a solution for this still hasn’t been figured out.

Another issue is accuracy. In the episode that 75254 AT-ST Raider is based on, “Sanctuary”, the walker is presented in darkness with glowing red eyes. While missing the glowing red eyes is forgivable in a LEGO set, it was a strange choice to go with such a bright red and clean brown, when from what is seen on screen the colours are more muted than that. It could be that the physical prop or digital models used were brighter, but whatever the reason, it feels too bright.

The inaccuracies continues into the minifigures, with the two Klatooinian Raiders. In the series, they have very pale, white faces, whereas these minifigures have a browner hue. Despite the difference, the detailing is incredible – their tiny little outfits look like the layered wear of marauders. Re-used accessories from NINJAGO work well as shoulder wear and neck gear, adding to the fierce look of the characters.

What is undoubtedly the main attraction in this set is the Mandalorian minifigure himself. The minifigure of the character reflects his outfit from the first two episodes and is beautifully detailed. He sports a nice cape and a very sharp looking helmet, but no face underneath – so preserving some mystery. Three elements come together to make a convincing recreation of his main weapon.

Cara Dune rounds out the minifigures with an excellent little doppelganger of the on-screen character. A nice armoured torso and printed legs capture what she wears on-screen, right down to the bare arms and black gloves. She features angry and merely annoyed expressions, with her tiny Rebel Alliance tattoo presented as a dot.

75254 AT-ST Raider offers a solid version of the classic Imperial walker and stands out from the previous releases thanks to its unique colours. It seems incredible that this set has been released while the Razor Claw has not yet, but those who would like to own an excellent minifigure version of the titular Mandalorian have only one option. I have spoken.

75254 AT-ST Raider is available now at LEGO.com. You can help support Brick Fanatics’ work by using our affiliate links.