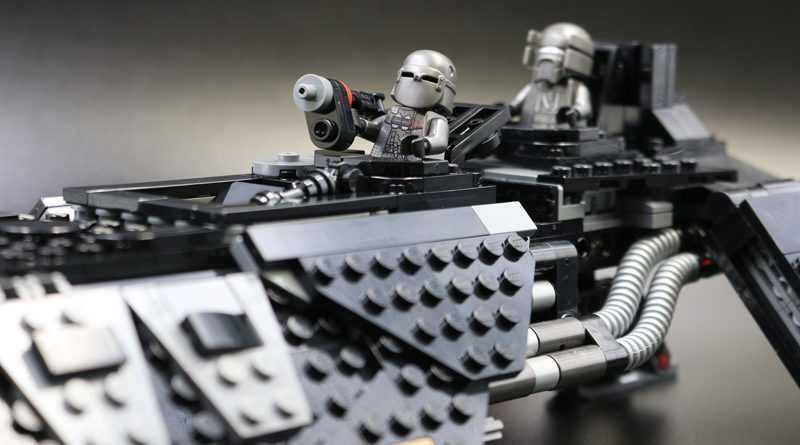 In LEGO 75284 Knights of Ren Transport Ship, Kylo Ren’s crew land in their ominous vessel from Star Wars: The Rise of Skywalker

Star Wars: The Rise of Skywalker was full of new ship designs and familiar designs with some revision, but one of the most original was the ominously named Night Buzzard, the flagship for the Knights of Ren. It might not have been on screen for long, but that’s never stopped the LEGO Star Wars designers before. For those who felt cheated, the ship had its life extended in the recent Rise of Kylo Ren Marvel comic series.

The set provides the perfect excuse to include the final two Knights of Ren as minifigures. Those looking for the full set will also need 75256 Kylo Ren’s Shuttle and 75272 Sith TIE Fighter.

LEGO Star Wars ships always feature a certain amount of Technic, either for stability or to incorporate some clever working mechanism. 75284 is all about the Technic. It begins with a long frame made of 1×8 and 1×12 Technic beams joined together by pins, which is quite fiddly as everything has to be placed in the correct positions for it to all fit together correctly.

That’s a slight drawback once the model is finished, as some of these blue and red Technic pins are quite easily visible, which does detract from it as a display piece.

Various dark grey and black plates cover most of this skeleton, and many are hinged to recreate the harsh geometric angles of the original ship. At the bow, wall elements cleverly achieve the ridged grille, whilst at the rear sloped roof bricks are some of the only old school elements in sight.

In the lore of the Star Wars universe, the Knights of Ren heavily modified the Night Buzzard to their liking and the irregular greebling all over the hull certainly gives the model a customised feel. Considering the relatively small piece count the detailing is actually really good, with grille tiles, quarter-circle tiles and other unusual pieces scattered everywhere. There’s not a sticker in sight, so fans don’t need to fear turning to the Dark Side.

Travelling alongside the hull plates are the tubes connecting to the sub-light engines and these use pearlescent-grey pipe pieces to great effect. However, they are a fiddly nightmare to attach, especially having to bend the flexible hoses into place. This is one part of the build that is extremely tedious as both engines are made in exactly the same way, so are repetitive to build.

It might be an interesting and at times challenging build, but there are some flaws within 75284. One of these is the fact that apart from two stud-shooters, the model has no play features. No brig for the Knights to imprison a minifigure in, no laser cannons to swivel around – there’s not even a real cockpit. Worse than that, it’s not even much fun to swoosh around because the angled plates are delicate and quite easy to knock off.  This means that younger fans may lose interest in it quite quickly, while adult fans will find little reason to have their minifigures interact with it.

The biggest issue with 75284 is all down to its piece-count. It has no interior. If a Microfighters set and a regular LEGO Star Wars set had a baby, then this model would be it. A Knight of Ren minifigure can be awkwardly perched on top of the model just like a Microfighter, but this looks so strange considering it’s supposed to be a huge ship with a crew and space to walk around inside. While the interior is never seen in the movie, and only briefly in The Rise of Kylo Ren, the designers could have taken some artistic license if only the model had had a bigger piece-count.

Rey is the same as in 75250 Pasaana Speeder Chase, but both Knights of Ren minifigures are totally unique to this set. Why the LEGO Group still just calls them the Knights of Ren on the box though is a bit strange, because they have all been officially named.

Cardo has the simpler mask but incredibly detailed torso printing – even the woven texture of his coat has been captured in pearl grey accents. Looking just as impressive is Kuruk, with this helmet mould brilliantly including the slits on either side. His inclusion also makes perfect sense as he’s the pilot of the Night Buzzard.

75284 Knights of Ren Transport Ship doesn’t feel like a set worthy of its full price-tag. It’s a decent display model from certain angles but the lack of play features and interior is disappointing. Part of the price probably comes from the new helmet moulds for the Knights, but to justify its cost the set would have benefited from another minifigure, such as a Pasaana alien.

With only two exclusive minifigures, 75284 Knights of Ren Transport Ship just doesn’t warrant its full price tag because the model is underwhelming when finished. It needed more pieces to make it more like a ship and less like a Microfighter because 75284 is in some strange limbo between the two.

For fans who want to collect all of the Knights of Ren, especially those looking to recreate the epic showdown on Exegol from the finale of The Rise of Skywalker, 75284 is a must buy. But maybe at a discount.

75284 Knights of Ren Transport Ship is available now at LEGO.com. You can help support Brick Fanatics’ work by using our affiliate links.