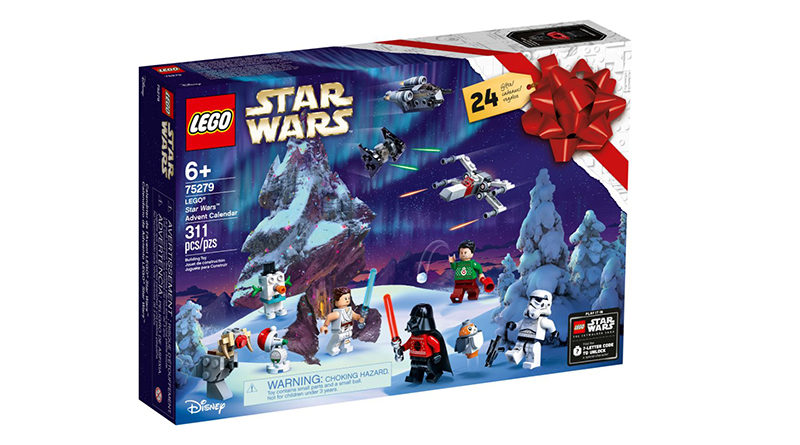 It’s three months until December, which means that this year’s LEGO Advent Calendars are available – there are four to choose from, including Star Wars, Harry Potter, City and Friends.

Each one includes a selection of characters and small builds, with something behind every one of 24 doors that count down from December 1 to December 24.

Kids can wake up to a gift every day in the run-up to Christmas with the 2020 LEGO® Star Wars™ Advent Calendar (75279) holiday building set. Behind each of the 24 doors is a Star Wars LEGO minifigure, LEGO figure, buildable starship, vehicle or location. Also, look out for a code to unlock Star Wars: The Skywalker Saga game content.

There are 6 LEGO minifigures and 6 LEGO figures to discover, such as Darth Vader with Christmas sweater decoration and D-O with a festive hat, plus a foldout playmat with an image of the Millennium Falcon with Christmas lights to inspire creative play. The 12 mini builds in this holiday calendar include Anakin’s Podracer, a Republic Cruiser and Darth Vader’s Castle.

Since 1999, the LEGO Group has been recreating iconic starships, vehicles, locations and characters from the legendary Star Wars universe. LEGO Star Wars building toys are hugely popular, with fun Christmas gift ideas for kids and fans of all ages.

Celebrate Christmas in the Wizarding World with this magical LEGO® Harry Potter™ Advent Calendar (75981). Behind each of the 24 doors is a different toy or figure from the Harry Potter series. As the big day gets closer, kids can recreate Hogwarts™ holiday scenes – including the amazing Yule Ball!

Kids can combine the 24 advent calendar gifts to recreate favorite scenes from the Harry Potter movies and role-play stories and adventures of their own. The calendar contains minifigures – including Harry Potter, Hermione Granger™, Ron Weasley™, Padma Patil, Parvati Patil and Cho Chang – and buildable models, such as a miniature Beauxbaton’s carriage and a dining table with ice-castle centerpiece.

The extensive range of LEGO Harry Potter models and playsets provide fans of the series with endless imaginative fun and creative display possibilities.

This LEGO City Advent Calendar makes a great gift for children aged 5 and up. Each build comes with easy-to-follow building instructions ensuring that even budding LEGO builders can enjoy a fun and independent build and play experience.

LEGO City Advent Calendars are packed with inspiration, festive excitement and wonderful surprises for kids who love creative play. The models, minifigures and accessories included in the calendar can also be combined with existing LEGO toy playsets for even more fun.

Make the Christmas countdown even more exciting with the LEGO® Friends Advent Calendar (41420). Kids will find a new buildable surprise hiding behind each door. The calendar is filled with super-cute Christmas characters, all of which belong to three themes: Emma’s room, Santa’s toy workshop and a winter wonderland. As kids open the doors they will progress through each setting, adding to the feeling of excitement.

Kids can decorate their rooms with the models, which includea LEGO Friends Mrs Claus and 2 elf mini-doll figures or play with the items together to make for a more creative narrative play. There are also action features, such as a fun snowball-launching catapult and a toy skateboard that rolls.

The fun toys are simple to build and come with clear instructions so kids aged 6+ can construct the gifts quickly and get on with the creative play. Introduce kids to Heartlake City, a place of great friendships and very merry Christmases!