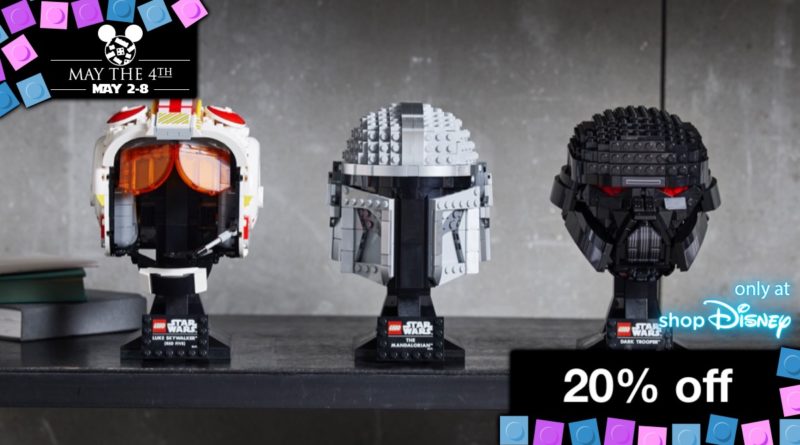 Only one of the eight LEGO Star Wars sets offered in the shopDisney May the 4th event is still left in stock, with the other seven all selling out on the first day of the sale.

shopDisney included three LEGO Star Wars Helmets in its May the 4th LEGO deals, with two of those selling out already. Debuting in 2020, the LEGO Star Wars Helmet Collection is a tasteful tribute to Star Wars’ most iconic designs. The three most recent entries in this theme were all offered in shopDisney’s Star Wars Day UK deals for £43.99. That’s a significant, 20% discount on the usual price of £54.99.

Click here to browse the LEGO Star Wars May the 4th sale at shopDisney via our affiliate link.

Indeed, the price is so appealing that two of the three helmets sold out within hours of the sale going live. Whether you managed to grab one of those or not, you can still make a saving of £11 on buying the one still remaining in the sale.

75327 Luke Skywalker (Red Five) Helmet is the set left standing – for now. It recreates the helmet Luke wears as an X-wing pilot in A New Hope. The bright colour scheme and mass of texture and patterns makes it an excellent choice for any Star Wars fan. Several key features of the helmet – like its transparent orange visor, chin strap and microphone – are also represented on the LEGO version, ensuring this set is as strong as possible.

75328 The Mandalorian Helmet recreates the helmet of Din Djarin, star of Disney+ show The Mandalorian. Similar in structure to 75277 Boba Fett Helmet, this set replaces those reds and greens with grey and silver. A smattering of drum-lacquered silver elements lend this set a premium feel, while smart construction techniques around the cheekbones help it feel more sophisticated.

Both that and 75343 Dark Trooper Helmet sold out only hours into the shopDisney Star Wars Day sales. The last of the three references the sinister robotic enemies of The Mandalorian’s second season. With their black colour scheme and sinister red eyes, they’re a great companion to other Star Wars villains – and hugely popular in helmet form.

2022’s sets draw from both the franchise’s earliest days and its latest projects. Each one comes with an identical display stand, allowing for easy display of multiple sets. In total, there was a £33 saving to take advantage of if you bought all three in this LEGO Star Wars Day offer.

Click through this affiliate link to view the May the 4th LEGO Star Wars Day sale at shopDisney now.

shopDisney’s May the 4th sales run from May 2 to the end of May 8, but only while stocks last. A total of eight LEGO sets were discounted by shopDisney when the sale launched, with seven of those selling out within hours. That means 75327 Luke Skywalker (Red Five) Helmet is the only set of eight still available in this shopDisney LEGO sale.

If you managed to bag your Star Wars Helmets before they sold out, head to iDisplayit and enter our exclusive promo code STARWARSDAY at checkout to claim 10% off until May 6.

Support the work that Bricks Fanatics does by making your LEGO May the 4th purchases through our affiliate links.