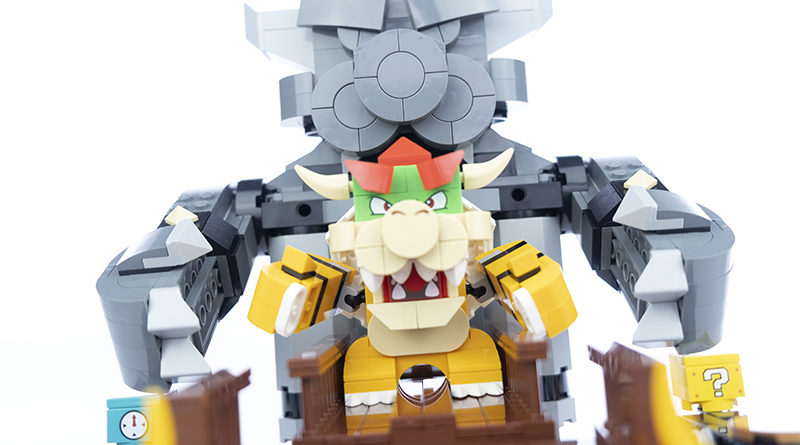 Of all the characters in the Super Mario franchise, Bowser is one of the most popular. The character has been a mainstay since Super Mario Bros., the game in which he and his castle first appeared. As the best-known Mario villain, it makes complete sense that he serves as the boss for LEGO Super Mario, taking centre stage in the largest set, 71369 Bowser’s Castle Boss Battle. In this Expansion Set, Mario must defeat the villain.

As with the other sets in the theme, the game aspect will only be playable for those who own LEGO Super Mario 71360 Adventures with Mario Starter Course (review), which contains the required interactive Mario figure.

Compared to the smaller LEGO Super Mario sets, the build is engaging and closer to a regular LEGO experience. The main structure, that builds the awesome stone Bowser and drawbridge, is intricate and requires careful step-following. Other aspects, such as the towers that adorn this main feature, are a bit more basic and closer to some of the mini structures in other Mario sets.

This definitely offers more than the purely functional sets though, partially thanks to that imposing Bowser statue. At minifigure scale, it is not often that a build this size would be included, so building something figural this large is fresh and engaging. It looks great from the front when finished too, offering a display piece that will stand out thanks to its size.

While the towers are clearly made up of just a few parts, they are fine to complement the central section, with the flowing lava a really nice touch. The wall sections also have a nice, chunky feel.

As with all of the LEGO Super Mario sets, the new mini baseplate parts are used as the base for pretty much everything, so that they can be rearranged and connected with two-wide plates. The recommended configuration looks pretty good though, with a vibe sure to intimidate Mario.

Once Mario has defeated the ancillary villains, he comes face to face with Bowser. First, he must jump on the left and right platforms to send the statue’s arms flying up. Bowser’s drawbridge is now angled and Mario must twist left and right to bring the villain closer to him, until eventually he falls. To actually finish Bowser off, Mario must… jump on his back, 10 times.

Aside from the gameplay shortcomings that are baked into the theme, the function in this set is not as well executed as would be ideal. When Mario hits those platforms to send the statue’s arms up and reveal Power Ups, he really needs to hit them to make it work. A sharp tap won’t do. Once they are up though, the drawbridge of doom works quite well.

Throughout the sets, the character designs are well executed. Using the same scale as the Super Mario figure, the characters are instantly recognisable and reflect their game appearances in a nice, LEGO-ised way. Bowser is an absolute highlight though, partly thanks to more brick-building being involved. There’s something extra satisfying about seeing his familiar form after building it.

71369 Bowser’s Castle Boss Battle Expansion Set retails for £89.99 or $99.99. The gameplay is not enough to justify that price. While it’s a great effort to use functions to make something happen during the boss battle, it isn’t a thrilling or challenging finale. It is probably the best display set in the theme though, although it is hard not to imagine the kind of castle Bowser could have had if this has been at minifigure scale.

Fans who buy into the LEGO Super Mario theme will want an epic boss battle and if one set from the theme is worthy of sitting on the LEGO display shelf, it’s this one.

71369 Bowser’s Castle Boss Battle Expansion Set will be available from August 1 at LEGO.com. You can help support Brick Fanatics’ work by using our affiliate links.