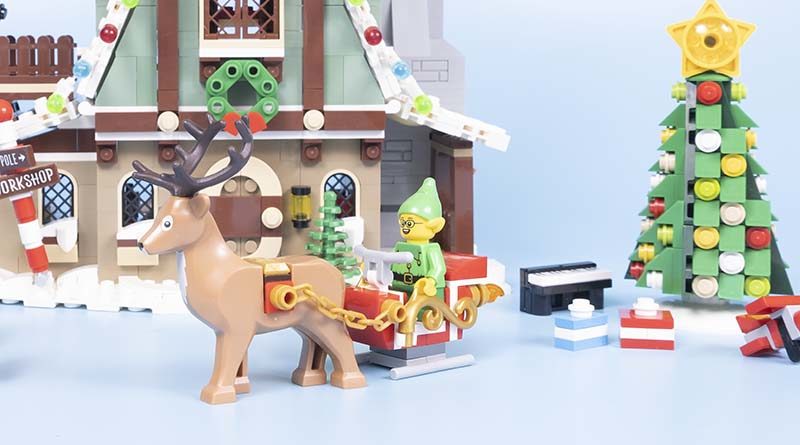 Each year, the LEGO Group releases a special LEGO set to display during the holiday season. The latest set in the Winter Village Collection continues the fantastical part of the series, which began with 10245 Santa’s Workshop and continued with last year’s 10267 Gingerbread House.

This time around, the subject matter is less conventional – while Santa’s helpers no doubt need somewhere to hang out when off duty, 10275 Elf Club House is not based on a traditional Christmas icon like those previous models. It allows the designers to have some fun and provides an opportunity for something that will have LEGO fans salivating… a moulded reindeer.

There is a lot of expectation around sets in the Winter Village Collection. Ever since the series launched with 10199 Winter Toy Shop, the models are expected to be detailed, intricate builds, using interesting techniques to offer a quintessentially Christmas set.

10275 Elf Club House doesn’t disappoint. Festive fans will have built dozens of Christmas trees at this point, with varying results. The one in this set uses a fairly simple method, but one that works perfectly for its scale, with cheese sloped providing the right texture.

As for the main attraction – not the reindeer, stay tuned for that – the building starts with the usual stacking of bricks and laying of plates, proving a bottom floor that is where the elf workers can enjoy breakfast, admire a family portrait and wrap presents. That wrapping station includes the set’s finest parts usage – classic car doors represent the roll of paper falling. It is probably one of the best parts usages not just of this set, but of the year.

While the front door isn’t quite as ingenious as that, the shaping of it fits nicely with the building’s overall aesthetic and seems appropriate for the elf residents. The use of slope pieces mean that there’s a nice shape to the doorframe too.

Things get really fun on the top floor, where a mechanism is tucked beneath the floor to allow the triple bunk beds to tip up when the alarm goes off. It adds a great sense of fun to the set, immediately evoking the idea of the elves waking up in unison to go about their day’s toy making.

Great details are include in the elf bedroom, including bedside tables, a little gift and a calendar with December 24 circled. The light brick is also used in this room, with the mechanism to turn it on more accessible than in some previous Winter Village sets. This time around though, the light brick feels quite superfluous and could have been left out.

One of the fascinating things about the various Winter Village sets has been how the roof comes together, as it’s those angled plates that really sell the idea of these snow covered structures. This time, the roof simply slots in place and is then held by only two Technic pins. It’s an elegant solution that raises a smile.

The top floor windows and balcony are also well constructed, giving the building a more interesting shape than it would otherwise have. A telescope provides a nice bit of storytelling, hinting at the elves enjoying some stargazing.

As for the actual house, the build concludes with the textured chimney. For the most part, this is as expected – although a shout out goes to the top of it, which uses several different parts to create small ridged detailing giving it an authentic feel.

What really surprises in building the chimney is the waffle maker at the bottom. The elves are cooking there, with the oven in the chimney base. A pan sits below, with a flick of a lever dropping a 1×1 waffle into the pan. That pan then tips up to drop the waffle out. It adds to the notion of efficient elves being dropped out of bed, lining up for their waffle, then sitting together to eat it before heading off to the workshop.

All of the colours used within the set stay within the Christmas palette; the beds are read, the rug is green, there are splashed of white throughout – there’s no doubt that this is a holiday home. To add variety, multiple shades of green are used.

In 10245 Santa’ Workshop, the elves all featured short legs and existing torsos. This time around, they have special bodies that are much more festive and in a suitably green colour. They all use the same torso, hat-with-ears and short legs, giving them a nice, clean look. To differentiate them, each elf has a different face and one wears a scarf.

Indisputably, the reindeer is a highlight of this set. Moulded and decorated to the modern LEGO standard – retaining the slight angular nature while capturing the realistic animal – it lives up to what LEGO fans will expect. Surprisingly, the antlers are not separate pieces that connect, but are attached to the head, made of a slightly softer plastic.

The interior to this set is smaller than 10267 Gingerbread House, which is disappointing. That’s not terribly surprising when the piece count is noted – this Winter Village Collection model uses around 300 fewer elements than last year’s, but the price remains the same. It seem likely that the new moulded reindeer is part of the reason for this, but it still makes this set feel slightly more expensive than it should.

10275 Elf Club House is an excellent companion piece to 10245 Santa’s Workshop. It’s a shame that the sets have been released so far apart, as newcomers to the theme can only get that previous set from secondary market sources. The differing reindeer – now moulded, previously brick built – will bother some, but it’s hard to complain that such a beautiful new animal piece has been introduced.

While it does not quite feel like great value for money, there is enough fun to be found in this model to recommend it anyway. This latest Winter Village set is a delightful set that evokes that festive feeling both during the build and once it is complete. Those with children should ignore the 18+ label and build it as a family to get in the Christmas mood, while those without should indulge their inner child for this annual LEGO tradition.

10275 Elf Club House is available from September 23 at at LEGO.com. You can help support Brick Fanatics’ work by using our affiliate links.