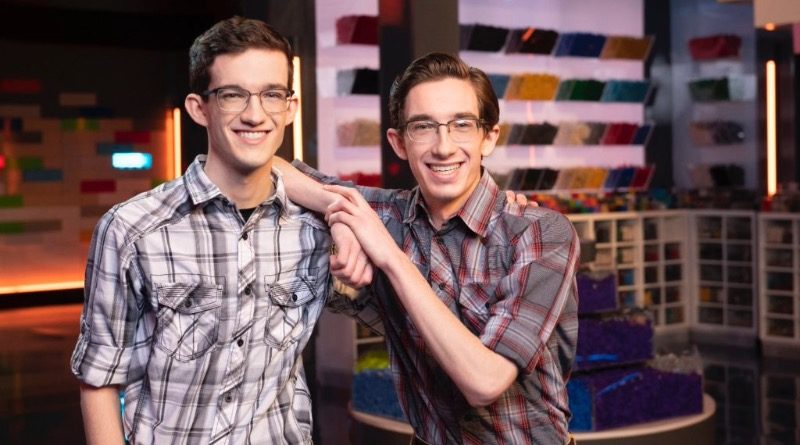 Twin builders Caleb and Jacob reveal how they took advantage of their telepathy to construct incredible builds in LEGO MASTERS USA Season 2.

The second season of the Will Arnett-hosted series is just days away from returning to screens, and LEGO Fan Media (including Brick Fanatics) were able to meet all 24 of the contestants ahead of their on-screen debut. You’ll be able to watch them in action from June 1, when the first episode premieres on FOX at 8pm ET / 9pm PT.

For now, let’s hear from Caleb and Jacob on their unique preparations for LEGO MASTERS USA Season 2.

Caleb: Jacob and I are twins. And so being twins we have the power of telepathy, which proved very useful on the show.

Jacob: We can’t be leaking secrets publicly to the other teams, so we did it privately through telepathy.

What do you hope the viewing audience will say about your team when all this is said and done?

Caleb: That’s a great question. I hope that the audience knows that Jacob and I like to have a good time and aren’t afraid to have fun.

Pretend LEGO product design called you up, and they said they wanted to put a minifigure based on the two of you into a new set. What would you want that set to be?

Caleb: Asking the real questions here. The go-to answer is a modular building, but that’s so lame. We don’t want to be in a modular building. We’ve got to be in something crazy, like the twin ninjas that show up in NINJAGO. Or a Collectible Minifigures series where they’re all the same. It’s just Jacob and me.

Caleb: We were actually reached out to by the casting department, but we couldn’t participate in Season 1, and we knew that early on just because we were at school at the time. But Season 2, we were called up again, which is quite flattering. Obviously the pandemic had hit, and there was some flexibility with online classes that we were able to take advantage of, which was super exciting.

So that’s the only reason any of this was possible. But I wanted to bring – I hesitate to use the word drag, but I wanted to drag my brother into this, to relive the awesome childhood we had together with LEGO.

What was the biggest challenge when you were on set?

Caleb: That clock is terrifying. Jacob can attest to that, too. It’s not something I’m used to down here in the basement where I have all the time in the world. Will Arnett isn’t yelling at me down here. It’s so peaceful. But yeah, the clock is very scary.

How did you prepare for being in the show? Did you have a good training regimen?

Jacob: I did absolutely nothing. Well, over the summer we did like one thing.

Caleb: There was some thought – a lot of it didn’t quite pan out the way we wanted to. But Jacob threw up a prompt on his Instagram story saying, ‘Give Caleb and I stuff to build.’ And so one of our friends gave us the prompt of hamsters with gumball machines for stomachs. And so Jacob and I each built a hamster with a gumball machine for stomach. So there were there was some training. But that was about the extent of it.

What was your involvement with the LEGO fan community leading up to LEGO MASTERS?

Jacob: I am not active on any social media platforms. My main social media page – my Instagram – is just pictures of pugs. And so that’s my interaction. Caleb, on the other hand, has a little bit more than me.

Caleb: I’ve been on Flickr for many, many years. I got on Instagram in the past year, and I just started getting involved on YouTube leading up to the premiere of the show. So that’s all very fresh. But the LEGO community is a wonderful thing to be a part of. I’ve been to BrickWorld, Chicago when it’s around, [and I’m] looking forward to hopefully going back there too. Hopefully I can bring my brother along with me to some of these conventions as well.