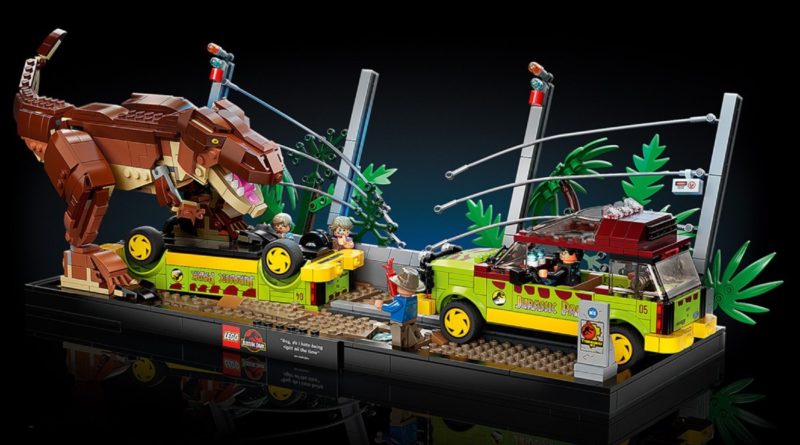 LEGO 76956 Jurassic Park T. rex Breakout has been officially revealed on social media, offering another angle of the dinosaur and Ford Explorer.

The LEGO Group has yet to add 76956 Jurassic Park T. rex Breakout to the official online store beyond the instructions database, but the displayable model has now been shown off on Twitter, including an additional angle of the set beyond what Target initially revealed.

The new angle details the shape of the brick-built T. rex’s head, with at least one eye design on a sloped element and it seems likely that there will be another on the opposite side.

The back of the two Ford Explorer builds reference the manufacturer with a Ford logo on a tile piece, confirming that Ford was at least partially involved with the creation of the model. This might tie into the previously discussed licensing issues with the vehicle as mentioned by designer Mark Stafford in an exclusive interview with Brick Fanatics.

The higher-quality images also reveal that the quote on the base reads “Boy, do I hate being right all the time.” as spoken by Ian Malcolm in the original film.

The social media announcement does not confirm the price or release date of 76956 Jurassic Park T. rex Breakout, but rumours suggest that it could be coming on April 25 for €99.99.

Support the work that Brick Fanatics does by purchasing your LEGO Jurassic Park and World sets using our affiliate links.