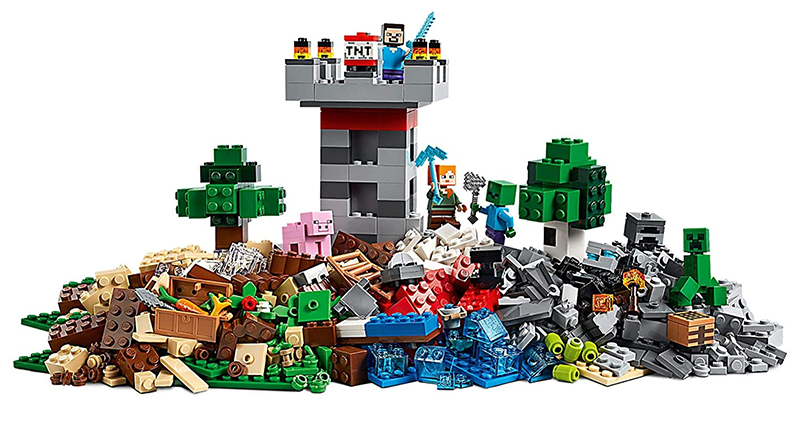 Two new LEGO Minecraft sets, including 21163 The Redstone Battle and 21161 The Crafting Box 3.0, are now available to pre-order at the official online shop.

On June 1, LEGO Minecraft 21163 The Redstone Battle and 21161 The Crafting Box 3.0 will be released. The two sets are available to pre-order now at LEGO.com.

Minecraft Dungeons is a new game from the popular franchise, released yesterday. 21163 The Redstone Battle is based on the new game and features four Minecraft heroes – Hex, Hedwig, Hal and Valorie. Articulated giants are also included, namely a giant Red Stone monster and a Red Stone golem.

Bring all the fun of the online Minecraft Dungeons game into the real world with LEGO Minecraft The Redstone Battle (21163). With posable giants, favorite characters and fun battles, this buildable toy gives Minecraft players an action-packed setting for endless hands-on adventures.

Kids create Minecraft action of their own as they take on the giant redstone monstrosity and the redstone golem. Kids use cool weapons to role-play battles and adjust the posable redstone monsters to create ever-changing scenes. There are also lots of fun accessories, such as the loot contained inside the Minecraft piggy bank.

21161 The Crafting Box 3.0 includes 564 pieces, with Steve, Alex, a Creeper, a pig and a zombie bringing character action to the model. As well as instructions, the booklet features inpiration and suggests for building different Minecraft inspired environments.

LEGO Minecraft The Crafting Box 3.0 (21161) brings the fun excitement of Minecraft into the real world with a diverse set of LEGO construction bricks and pieces.

The Crafting Box set is bursting with Minecraft ideas and inspiration. With popular characters from the game – Steve, Alex, a Creeper, a pig and a zombie – and a host of fun features – from a TNT launcher to a Creeper confrontation – this toy playset brings Minecraft adventures to life!