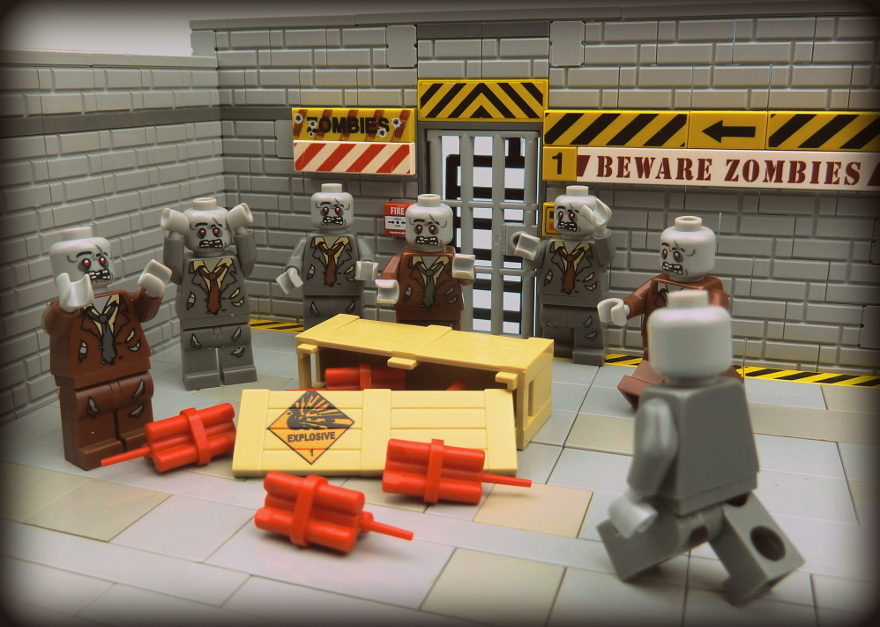 It’s time for another Nick’s Corner. This week I’ve been busy building for an upcoming show I’ll be displaying at, this has caused me a few too many visits to Bricklink much to my wife’s delight ! “Don’t you have enough bricks already?” she shouts as she hears me click the Checkout button, as any AFOL knows you can never have enough Lego. But at the rate Lego are releasing sets it’s hard to keep up Many of these sets contain new parts or parts in a colour you don’t have and of course new minifigures that you have been waiting for to add to the MOC the average fan can’t keep up. But one release I do save for and make sure I get straight away are the collectible Minifigures  over the next few week’s I’ll feature a few builds that I’ve created with them. You will also be able to see how I have developed both my building and photographic techniques over the last few years.

First released in May 2010 now six years later they are still going strong, we are now onto series 15 and if you throw in the Simpsons, Movie and Team GB figures and there’s quite a few to collect with many more on the way, the rumored Disney series and series 16 will be coming to a toyshop near you very soon. I do always look forward to the release of these and also look forward to the rumor mill that surrounds the forth coming series. I normally have an idea of what I’m going to build with a few of the figures and plan something before their release. The Collectible Series  never fail to disappoint and there’s always some new and interesting parts to be had in each release.

Way way back in time not long after I’d exited my dark age I started collecting, building with and photographing using with the newly released collectible Minifigures this was my first build using a Series 2 Mime Artist which I also entered it for a competition over on The Brothers Brick. A little rough around the edges in both build and photography and no I didn’t win !

A few years later in way of an apology I created a lovely colourful build for him I’m sure he really loved it.

Still with a great deal to learn about photo editing I used a Series One Nurse to create a build based on the fact I was going into hospital for a knee operation the very next day. I put the rather shaky editing down to pre-op nerves. I’m ashamed of my hospital corners in this one. I may re-edit it one day.

Knee operations are common place in my family so again using the Series 1 nurse with a few Series 6 Surgeons thrown in for good measure this build was created as a good luck/get well card for my Dad. Still shocking editing in evidence here.

On the rare occasions it isn’t raining in this country I have been known to venture out and take a few of my minifig’s with me, there’s no better setting than a beach in Cornwall for a Series 2 and Series 4 Surfer Dude and Dudet to hang out, and it saves me trying to edit !

Still a favourite of mine is a build I created on Christmas Eve 2011 Using the Series 6 Sleepyhead the build was to in relation to my son’s antics that evening and still reminds me of his innocence  keep coming downstairs looking to see if Santa had been and keep getting sent back up the stairs to bed.

Thankfully he finally got to sleep and Santa did bring him the Lego he’d asked for.

Of all the collectible figures Series One Zombie has to be my favourite I’ve got quite a few but I’m always on the look out for another to add to the clan. Thankfully Lego added a few more Zombies to Series 14 and of course there’s a few in the Monster Fighters theme. The picture below also features the brown suit zombie from the Halloween accessory set and a few custom printed items I spoke about last time. I think it’s the worried look on their faces I love the most.

Another favourite of mine are the Costume Mascots figures. The Gorilla Suit Guy first appeared in Series 3 and since then we have had a Lizard, Bunny, Chicken, Bumblebee, Pig, Unicorn, Shark, Hotdog and Panda, for some reason these are now commanding high prices, on sites like Ebay I’ve seen a Bumblebee sell for £20 + and the Chicken Guy isn’t far behind in value As you can guess I’ve had some great fun with these figures and the next Nick’s Corner will feature these So until then,