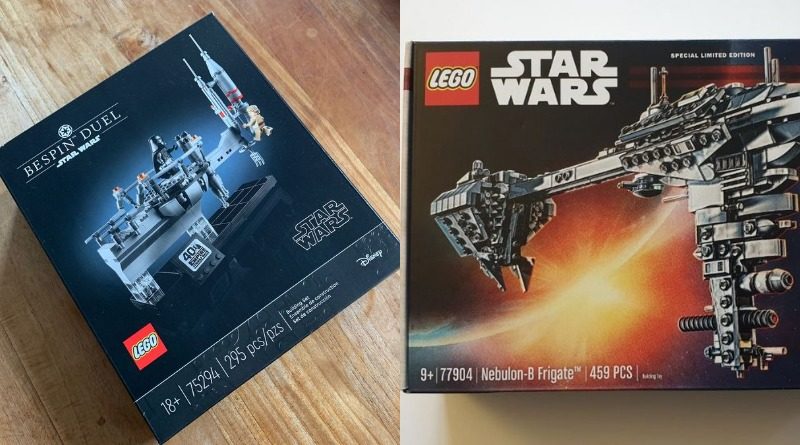 European LEGO fans can get their hands on this year’s limited edition LEGO Star Wars sets 75294 Bespin Duel and 77904 Nebulon-B Frigate in the latest Catawiki auction.

Both of these Star Wars sets were originally intended as convention exclusives. But when the pandemic put paid to Star Wars Celebration and San Diego Comic-Con, the LEGO Group instead released the Empire Strikes Back anniversary models to retail.

Unfortunately, the limited production run on both sets meant they were bound only for the US market. Fans in Europe, South America, Asia and beyond were left high and dry. But thanks to Catawiki, you’ve now got another chance to pick up these sought-after sets.

There’s really no better way to celebrate the 40th anniversary of The Empire Strikes Back than with a recreation of its climactic showdown. The scene on the box remains one of the most iconic ever committed to the silver screen, as Darth Vader reveals the truth of Luke Skywalker’s twisted parentage.

This 295-piece set was originally intended for this year’s Star Wars Celebration. With that event curtailed by coronavirus, the LEGO Group instead listed it very briefly on LEGO.com in the US. It didn’t last long. Thankfully, this latest Catawiki auction means fans in the UK and Europe now have a chance to grab a new, sealed copy for themselves.

San Diego Comic-Con exclusives have always been difficult to come by. But the cancellation of this year’s event provided a rare opportunity for more fans to get their hands on 77904 Nebulon-B Frigate, which found its way to LEGO.com, Amazon and LEGOLAND Discovery Centres – in the US, anyway.

For fans beyond US borders, it’s understandably been a little trickier to acquire. There are only a handful of these sets in existence, let alone available on the market. Catawiki‘s auction therefore provides a very rare opportunity to bag a mint, sealed version of the set from a European seller, allowing UK and European fans to avoid hefty US import fees.

The value of convention-exclusive sets only tends to go in one direction – up – so either of these models would be a great grab for collectors and investors alike.