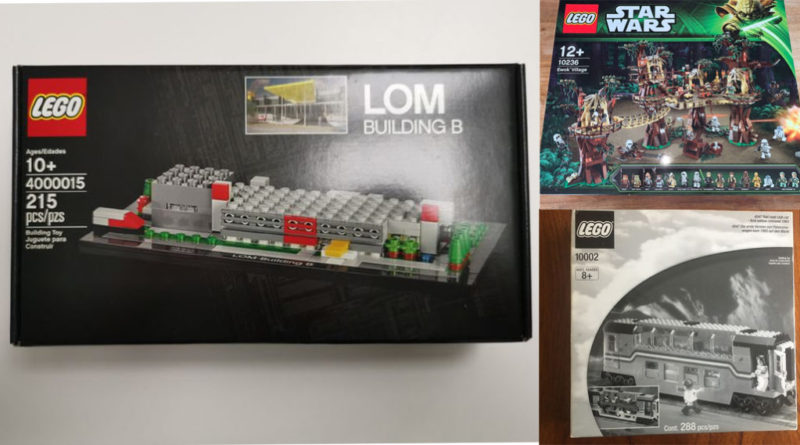 Have you ever wanted to own a LEGO employee exclusive set? Or a LEGO doll? Well how about Star Wars 10236 Ewok Village? Catawiki is offering something for everyone with the site’s latest round of auctions.

Where does the LEGO fan who has everything turn next? What do they start hunting down? Employee exclusives. There’s one up for auction right now, as well as classic retired LEGO sets from Trains and Star Wars – and less classic, but still retired, products from the Scala theme.

What are the rarest LEGO sets? Not the convention exclusives. Not the theme park specials. Not the gift with purchase sets. The rarest are the employee exclusives, which are only given to those who work for the company.

When the LEGO Group opens a new factory, a special set is produced – in the case of 4000015 LOM Building B, the set in based on the expansion of the LEGO factory in Monterrey, Mexico. The set was released in 2014 and, like other special employee sets, is one of the rarest models and hardest to track down.

Some of the regular release LEGO sets have also become hard to find of course, with 10002 Railroad Club Car being one such release. In 2001, it launched as a re-release of 4547 and has since become almost as desirable as the original version. As was common with LEGO Shop@Home exclusives at the time, it comes in a black and white box.

LEGO Star Wars is good at throwing up retired sets that don’t come up for sale as often as fans would like – or at least not often at a fair price. The wonderful playset 10236 Ewok Village offers the perfect LEGO recreation of the tree house village where the teddy bear protagonists from Return of the Jedi plan their attack on the Empire. For those still looking to fill this gap in their collection, an auction might end at a more agreeable price than one set by some overly optimistic Amazon sellers.

3103 Christian in Blue Blazer and 3104 Caroline in Red Dress

There are some wonderful LEGO oddities from over the years and every fan should have a few of them in their collection, at the very least to show friends and surprise them with the strange corners of the toy market the LEGO Group tried to muscle in on. LEGO Scala definitely fits into that category, from when the company was dabbling in dolls for a few years during the 1990s.