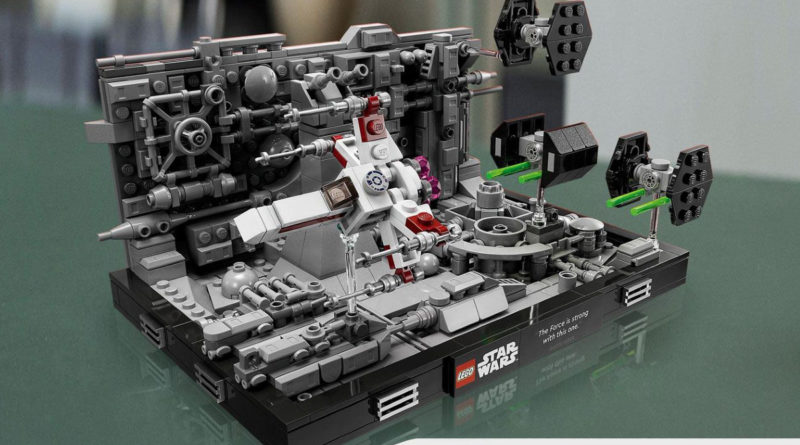 The rumoured LEGO Star Wars summer 2022 scene sets have been revealed by listings on Amazon, including images, prices and release dates.

Rumours of two LEGO Star Wars scene sets have proven to be at least partially accurate by Amazon DE as a listing with images for 75329 Death Star Trench Run has been revealed on the retailer, including an additional image featuring 75330, which was rumoured to be named Dagobah.

While full images for 75329 Death Star Trench Run have been revealed, the same can’t be said for 75330, which only features in one picture. From what we can see of the trench run recreation, it uses microscale to recreate the moment where Luke Skywalker dashes through the Death Star’s exterior pursued by Darth Vader, with a quote on a tile reading “The Force is strong with this one.”

Notable details include the exterior with a turret to blast at incoming ships and a small printed circular tile depicting the dome R2-D2 in what might be the smallest brick-built figure yet. According to the listing, it will retail for €59.99 and launch on May 1.

75330 depicts Yoda’s hut from the swamp planet of Dagobah with Luke training to lift the X-Wing out of the swamp. A muddy R2-D2 sits nearby as a thick wall of roots and trees lines the back of the model. It appears to have the quote “Do. Or do not. There is no try.”

According to another listing, 75330 will retail for €79.99 and launch on May 1 as well. Following this retailer reveal, we may see more official information soon but nothing has been confirmed.