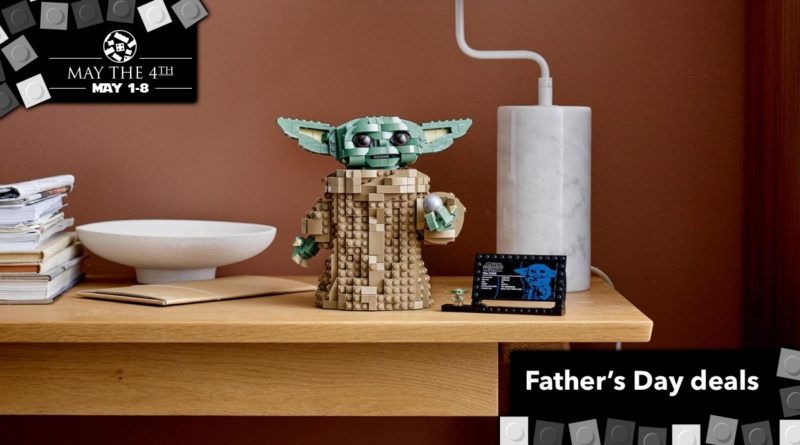 Father’s Day is just over a month away, so now’s the time to secure some top LEGO Star Wars gifts in Zavvi’s huge May the 4th sale.

Is your dad – like so many – the man who has everything, and is therefore impossible to shop for on Father’s Day? Well, ask yourself: does he have a giant LEGO Millennium Falcon taking up an unreasonable amount of space in his living room? How about a Darth Vader helmet looking down menacingly from the mantlepiece?

If the answer to both of those questions is ‘yes, actually’, no worries: there are plenty more options for brilliant Father’s Day gifts in Zavvi’s latest sale, which marks Star Wars Day with plenty of discounts across the LEGO range from a galaxy far, far away. Click here to check out a full list of deals, or scroll down for our picks of the best LEGO Star Wars sets for Father’s Day, which this year falls on June 19.

So maybe your dad’s not a LEGO fan. Don’t worry: there’s still time to change that, and especially if Star Wars is his thing. 75329 Death Star Trench Run Diorama is as sophisticated as display models get, while also serving as a great entry point into the theme as a whole, and all within a footprint that won’t command your entire shelf. Hard to say no to that – particularly with an early discount in Zavvi’s sale.

No matter how manly a man your dad is, nobody can resist the charms of Grogu’s adorable face, even when it’s built from sharp, angular LEGO bricks. 75318 The Child recreates Baby Yoda at a scale that pairs well with 75308 R2-D2 (hint, hint), and would be perfect to put together while watching The Mandalorian with your dad on Father’s Day. That’s June 19 all planned out – and for just £49.99, down from £69.99, at Zavvi.

If you really want to quantify your love for your dad, consider splashing out on the biggest – and arguably best – LEGO Star Wars set of them all this year. It’s no small ask at £579.99, but that is still a huge 17% (or £120) off 75192 Millennium Falcon‘s retail price. For your money, pops will get to put together 7,541 pieces of pure LEGO Star Wars goodness, which might just keep him happy until Father’s Day 2023.

Display models are great, but if your father is the type to really want to recapture the feeling of building LEGO as a kid, playsets are the way to go. 75326 Boba Fett’s Throne Room is a great choice, not only for its vast minifigure selection, but also because it’s currently available for nearly 17% off in Zavvi’s May the 4th sale. Just don’t be surprised to catch your dad making the ‘pew pew’ noises – it happens to the best of us…

Your dad might not have the same kind of authoritarian approach to ruling the household as Darth Vader did to the Empire – and hopefully not the same parenting techniques – but he can still recreate one of cinema’s most iconic characters with 75304 Darth Vader Helmet, which is available for a cool £48.99 in Zavvi’s May the 4th sale. Just beware the endless ‘I am your father’ dad jokes that will surely follow…

Click here to check out the full Zavvi May the 4th LEGO Star Wars sale.

Support the work that Brick Fanatics does by picking up your Star Wars Father’s Day gifts from Zavvi using our affiliate links. Thank you!