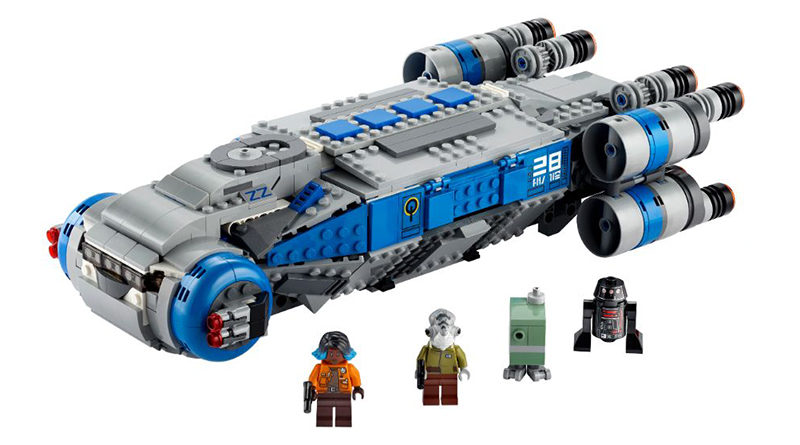 A LEGO Star Wars set inspired by Galaxy’s Edge, the Star Wars land at Disneyland and Walt Disney World, has been revealed to be 75293 Resistance I-TS Transport.

Last May, Brick Fanatics speculated on how the LEGO Star Wars theme could tackle Galaxy’s Edge, the Disney theme park land set in a galaxy far, far away. Today, the LEGO Group has announced 75293 Resistance I-TS Transport – a set based on the land and specifically the Rise of the Resistance attraction.

All four characters included in the 932 piece set appear during the Rise of the Resistance attraction, which is where the starship’s design has been taken from.

Young Rebels can play out heroic missions with this LEGO® brick-built model of the Resistance I-TS Transport (75293) from Star Wars: Galaxy’s Edge – a new land at Walt Disney World Resort and the Disneyland Resort. The top of the shuttle lifts off and the sides open for easy play, and there are 4 rotating stud shooters by the cockpit and 4 rear stud shooters for battle action.

Great for solo building and play or sharing the fun with friends, the set includes 4 Star Wars characters – Lieutenant Bek and Vi Moradi, plus Astromech Droid and GNK Power Droid LEGO figures – to role-play galactic adventures. This construction toy also makes an awesome display piece and it combines with other LEGO Star Wars sets for even more creative fun.