Fans were pleased to see The LEGO Batman Movie get an unexpected extra wave of sets in 2018, and 70920 Egghead Mech Food Fight may well be the best of them all

The LEGO Batman Movie was packed with blink-or-you’ll-miss-it vehicles for the villains of the piece, with the animated flick moving at a frenetic pace, especially in its opening sequence. 70920 Egghead Mech Food Fight adds another wonderfully comical design to the theme based on the film, with typically daft minifigures to sweeten the deal.

Unfortunately for the LEGO Group, it appears that they were expecting last year’s The LEGO Batman Movie to be a bit more of a hit than it turned out to be. A fourth and final wave of sets, released over a year after the film’s release, is likely a function of production schedules having to be set far enough in advance to preclude adjustments based on unpredictable things like box office results. While some may be suffering from Dark Knight fatigue, no-one should overlook this last batch of movie sets, especially 70920 Egghead Mech Food Fight. 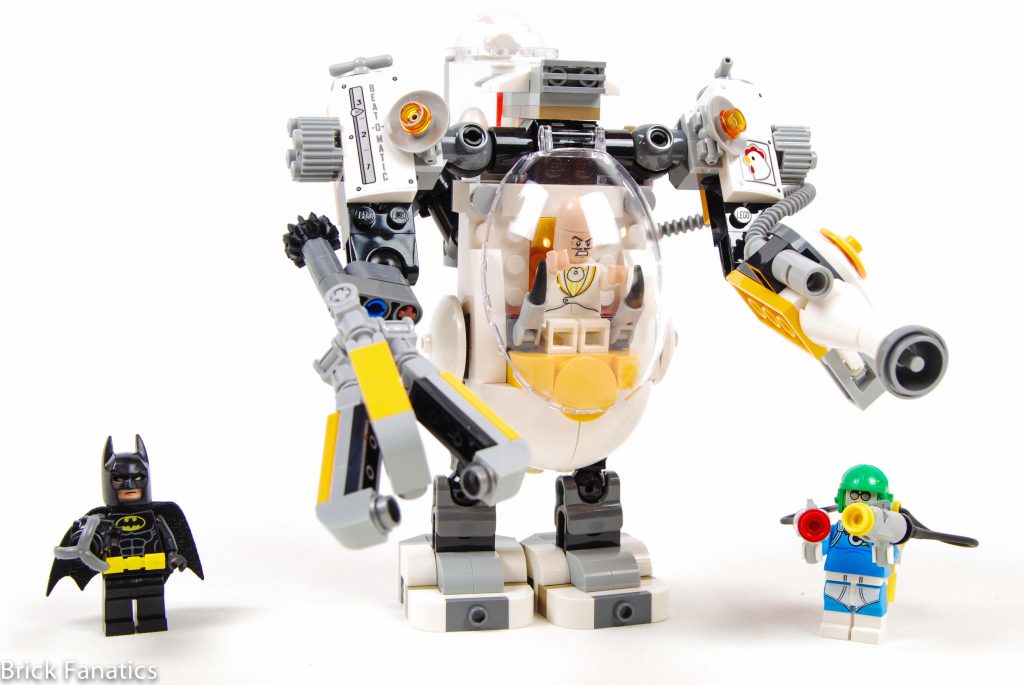 Those of us of a certain vintage can remember a time before LEGO mechs existed. EXO-FORCE changed all that in the mid 2000s, and since then many iterations of these two legged vehicles have been released across a variety of themes. Those years worth of learning for the LEGO design team have resulted in models that are for more secure and poseable than their early counterparts – all of those best practices have been incorporated here. Egghead’s Mech corrects all of the problems from years past. It has an easily accessible cockpit, poseable legs, a low center of gravity and a well executed pair of weapons, both ranged and melee.

Solid construction serves as an excellent base, but it is not the be-all and end-all of 70920. Designers have taken the ludicrous concept of an egg based villain and run with it, to hilarious effect. There are more egg related puns and gags on this set than one can shake a whisk at.

The body of the mech itself resembles an egg and both weapons systems stay with the theme. The LEGO Group has long established the formula of mechs being armed with close quarters melee weapons in one hand and a ranged weapon in the other, so here both of those are given an egg based makeover. Hand to hand combat is done with a grabber arm, designed to look like a whisk, that can spin via rotating a gear. The ranged weapon starts in the backpack, and is the most amusing part of the whole set. Much like Garmadon’s Shark Mech, a backpack container serves as the source of ammunition. Here, what must be the world’s most engorged chicken lays eggs which are incubated before being sent via tube to the gun, that boasts a printed dish with different culinary settings.

Multiple printed parts, a great parts to price ratio and a variety of other details across 70920 Egghead Mech Food Fight add even more value to the purchase. It is the minifigures that seal the deal, though. The titular Egghead himself is of course included with a unique headpiece giving him an extra bulbous, bald, cranium. Included alongside him, presumably to spice up the egg based delicacies, is the Condiment King. This is one of The LEGO Batman Movie’s best depicted villains, not because of his actions but due to being so outlandish that the LEGO Group taking him seriously is funny in its own right. Every bit of his detail is captured here including his ketchup and mustard shooters – who ever imagined that the LEGO Batman theme would lead to this?

If like me you set out to collect many – if not all – of The LEGO Batman Movie sets than we can be forgiven for feeling as if our wallets have had a suction hose attached to them over the last twelve months or so. But it’s only money after all, and the quality, general zaniness and outstanding minifigure selection that has marked most of the theme’s sets continues here. Get ready to splurge on bat merch at least once more and add this set to your collection before it disappears off store shelves, and we only fondly recall a time when we could buy sets this wacky.