Target stores will be hosting a build event for The LEGO Movie 2: The Second Part in February.

A whole bunch of in-store activity was announced for Toys R Us Canada relating to The LEGO Movie 2: The Second Part, with US fans now getting confirmation that Target will be getting in on the action too. The Brick Fan reports that a build event will be taking place at the retailer on February 16.
It sounds like it is not of the make and take variety, and very child focused. The advert reads:

Kids will build a ship with a few bricks, play a game & get a vest that matches Emmet’s!

The best part? They get to keep the vest! Awesome!

The event will run from 11.00am until 2.00pm at participating stores. 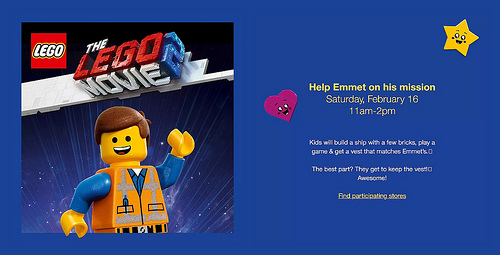 A new poster was recently revealed for the animated epic.

Products based on The LEGO Movie 2: The Second Part are of course available to buy now, with the biggest and most anticipated, 70840 Welcome to Apocalypseburg! launching on January 16 exclusively at shop.LEGO.com.