Following its US launch earlier this week, The LEGO Movie 2 Videogame is also available now in the UK.

The LEGO Movie 2 Videogame has been released today in the UK, giving fans the chance to play through the worlds from the animated film. An exclusive version is available at Amazon that comes with the polybag 30620 Star-Struck Emmet.

The game is available on Playstation 4, Xbox One and Nintendo Switch. The Nintendo Switch release is digital only, with a physical version coming on March 15.

The alien monster invaders have left Bricksburg in ruins. It is now up to Emmet and a host of heroic characters to go beyond their world and save their friends from the strange inhabitants of the Systar System. Players can journey into outer space, discover new worlds, and test their Master Building skills. 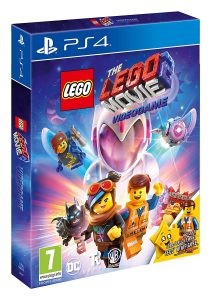