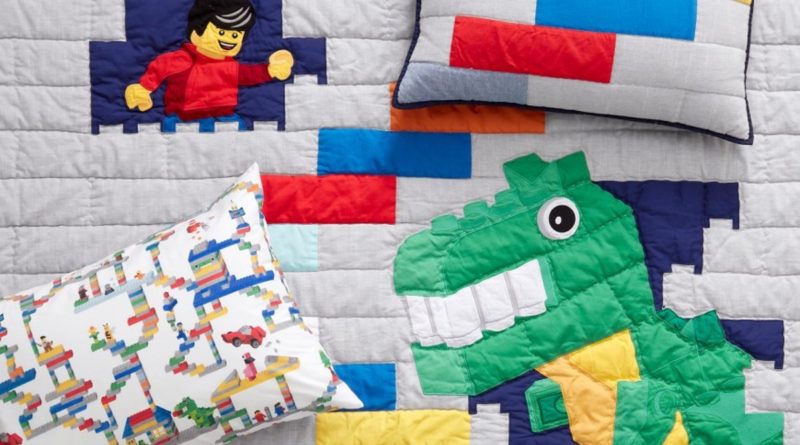 The LEGO Group has joined forces with American retailer Pottery Barn for a new range of brick-inspired soft furnishings for children.

Pottery Barn Kids – a child-focused offshoot of Pottery Barn itself – is partnering with the LEGO Group to produce bedding sets, rugs and other accessories aimed at younger LEGO fans.

“The foundation to our brands coming together is our shared belief that only the best is good enough,” mentioned Satwik Saraswati – design director at LEGO Licensing and Extended Line. “We loved seeing the LEGO design principles of playful and iterative storytelling woven into the beautifully crafted Pottery Barn Kids pieces. We look forward to this collection unleashing creativity and fun in children’s rooms, as it did within our teams when they came together to work on it.”

Pictures for the collection reveal a vibrant colour scheme, along with images of minifigures and brick-built dinosaurs on the items in question. So far, a LEGO bedding set (in twin, queen and full-size options) has been confirmed, along with matching sheets and pillowcases. Other confirmed products include a circular play mat and a pyjama set.

Pottery Barn has most of its stores in the US, although the brand has collaborated with UK retailer John Lewis in the past. These new products don’t appear to be on the Pottery Barn Kids site yet but they likely will be soon.

For anyone older or unfamiliar with Pottery Barn, the LEGO Group sells several clothes, backpacks and other accessories for various ages through the official online store and other retailers, some of which have seen big price cuts in the past. However, it’s unclear if these new Pottery Barn items will appear on LEGO.com.