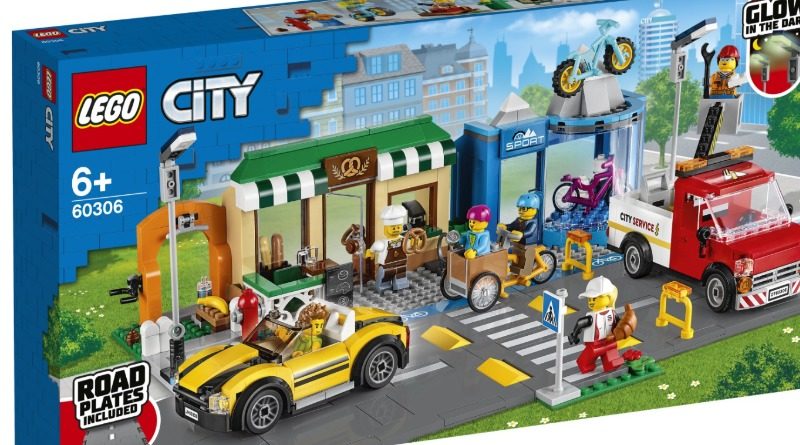 Two new additions to the upcoming wave of LEGO CITY sets have been revealed, including a bustling street of shops.

The majority of the 2021 LEGO CITY range was unveiled two weeks ago, but now two more sets have been spotted at an online retailer, as reported by YouTuber Ashnflash. The new additions are 60305 Car Transporter and 60306 Shopping Street.

60305 Car Transporter features a two-level vehicle hauler that is carrying an orange sports car. The transporter looks to be able to hold three cars: two on its upper deck, and one down below.

The busy 60306 Shopping Street features a road-way flanked by a work-out area, bakery and sports equipment shop. The sports shop looks particularly interesting, with a classic LEGO bicycle in a brand new purple colour on display. Outside the shop looks to be another new bike model, this time in yellow with a built-in child-carrier at the front.

The road features two of the new glow-in-the-dark street lights, which will be debuting as part of this new LEGO CITY wave. Just in case these innovative new LEGO elements need some attention the set includes a ‘City Service’ repair truck, ready to change any faulty light bulbs.

Both of these sets are expected to arrive in January alongside the rest of the recently revealed range. The new LEGO CITY range is notable for having a broader focus than in previous years. In addition to the usual blue-light services the range includes a wide variety of community buildings. Citizens of LEGO CITY can now look forward to trips to a pizzeria, dojo, allotment garden, car wash and skate park.