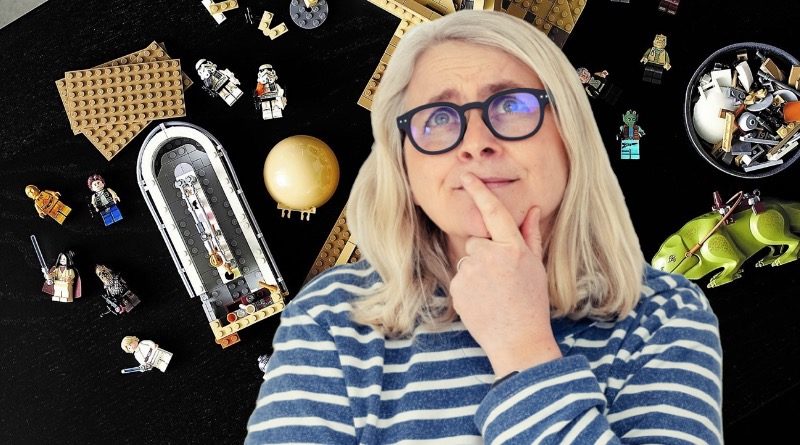 Author and screenwriter Emma Kennedy discusses mixed reactions to Marvel, the boredom of Star Wars and the novelty of Ideas while figuring out the ingredients for an entertaining LEGO set.

There’s no way of knowing whether a build on Relax With Bricks is going to be a rip-roaring success or a damp squib, but then that’s part of the joy.

We’ve been cracking on with 76178 Daily Bugle over the past two weeks, and I won’t lie: it’s split the pack. I loved everything about it: the clever side panel that can be pulled out from the ground floor; the way the front facias lift off to reveal all; the super news-based interiors that convey bustle; Green Goblin bursting forth from a breaking window; the stunning Daily Bugle sign that finishes the whole thing off and the absolute scrum of minifigures.

For those alone, the LEGO Group is truly spoiling us. I adored every last second of it.

More often than not, though, there will be dissenting voices among the dedicated AFOLWACs (Adult Fans of LEGO Who Are Chums) who watch the channel. Bevis Musson, our sensei, was most insistent that the greyness and the relentless repetition of the Daily Bugle exterior was nothing to get excited about.

The designer, Bevis told me, made a deliberate choice on this – the other LEGO modular buildings being too ‘gingerbread house’ for his liking – and to counter those, he wanted the Daily Bugle to feel like a great lump of urban concrete. Well, mission accomplished: it’s now the tallest set in my LEGO shed, and it positively shimmers with modern city vibes. Whether this is a positive or a negative, though, is down to personal taste. I love it; Bevis isn’t fussed.

There were other quibbles: why have a fake lift when we could have had one that worked, and where oh where are the moving parts? I agreed with both: there’s really no excuse in a set of this size and price to not go the extra mile – a lift would have been easily accomplished, and as for no moving parts, don’t get me started.

No moving parts infuriates me. If they can put a moving part in much smaller sets, why not pepper them through the bigger ones? I rather think it should be the law that any set over £100 comes with at least one moving part, so take note, please, LEGO: MORE MOVING PARTS.

We always score our builds, and with strict deductions for the lift and lack of bits to wobble, slide or flip, 76178 Daily Bugle walked away with a very respectable 8/10. That’s pretty decent on RWB, sticking it up there with many of our bigger builds and way outstripping our last build, 10292 The Friends Apartments, which ended up with a paltry 6/10 (with three points deducted for the stupid foosball table alone, which was misplaced, collapsed every time you so much as breathed on it and drove us all to distraction).

But the set that promised so much and gave so little was 75290 Mos Eisley Cantina. Central bar to one side, which is delightful and could have been a set on its own, it was the relentless beigeness that left the AFOLWACs who were not diehard Star Wars fans bored stiff. ‘Oh good, another bag full of the same-coloured bricks,’ they would moan. ‘Again.’

I don’t mind builds that are predominantly one colour (unless it’s grey, in which case, tatty bye, not interested), but when a set is relentlessly repetitive – as Mos Eisley was, with little to no detailing on the cantina and one measly moving part that, I’m sorry to say, was also a bit rubbish – it becomes a hard sell to viewers who are willing you on.

This is where Club Business, the messages that are posted each day on YouTube and Twitter, come into their own – and why any LEGO build we do on RWB, even if it’s skirting round the edges of Boring Town, can still be entertaining.

For me, it’s always a thrill to discover my current build is delighting the viewers – I’m building 21327 Typewriter this week, with all its Technic of doom. It’s a very different build for us on RWB, but it’s proving popular, not least because we’re all fascinated as to how it’s actually going to work.

But as ever, it doesn’t really matter what we build. The important bit of RWB is that we’re doing it together, whether we agree or not, and long may that continue.