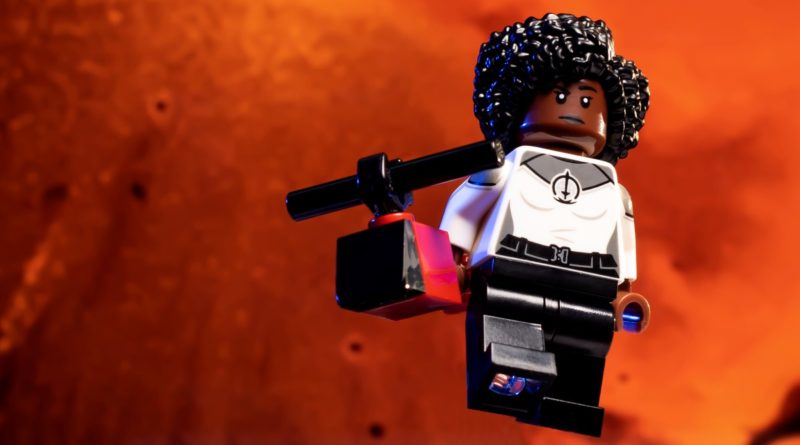 The LEGO Marvel Collectible Minifigures series introduces S.W.O.R.D Agent Monica Rambeau to the roster, but just who is this latest superhero?

Whilst many of the characters in 71031 Marvel Studios depict returning faces, there are a few debut minifigures amongst them including WandaVision’s very own Monica Rambeau. As one of three minifigures representing the show in the selection, Monica is also the first to include the uniform of the Sentient Weapon Observation and Response Division.

Initially appearing in Captain Marvel as the daughter of Maria Rambeau, the aspiring agent was subject to Thanos’ devastating snap as the world, and her mother moved on without her. Coming back five years later, Monica awoke to discover that Maria Rambeau, Director of S.W.O.R.D had passed away before her return

Moving forward to WandaVision, the first of the Marvel Cinematic Universe’s new TV shows to air on Disney+, Monica was assigned to the Westview anomaly operation to try and discover why the town was completely inaccessible. Of course, we know now that The Scarlet Witch was the cause of the hex, trapping the citizens of Westview inside. Faced with no other option, Monica risked everything and forced her way through the barrier, gaining her new powers and attempted to plead with Wanda to let the town go.

Teaming up with the Maximoff family, Monica fought back the misguided S.W.O.R.D and Agatha Harkness, finishing her mission and freeing Westview from Wanda’s accidental clutches, only to receive a new mission from Captain Marvel, and her Skrull companions, herself. Roll credits.

As with most of the minifigures in 71031 Marvel Studios, the detail on Monica exceeds that of the standard Marvel sets and those who have watched the show will undoubtedly recognise the reference in her accessory. Considering that Monica Rambeau and her energy-based skillset is to return in The Marvels, it will be interesting to see how this initial version compares to her inevitable super-suit design.

You can find Monica’s first minifigure in 71031 Marvel Studios when it launches on September 1. To help pass the time, why not check out our refresher on every character in the Collectible Minifigures Series and read our in-depth review to see why the range showcases the true potential of LEGO Marvel.

Stay tuned for even more character showcases as we’ve finished our tour of WandaVision’s brick-built characters and move on to the next show in the MCU.