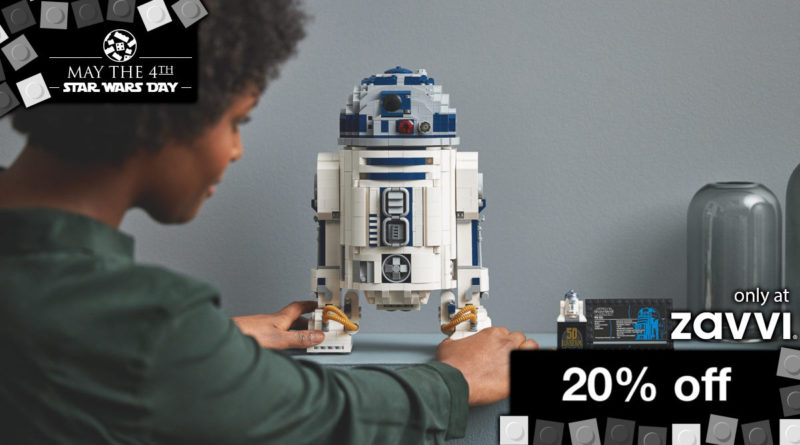 75308 R2-D2 – a recent addition to the LEGO Star Wars Ultimate Collector Series – can be found with a 20% discount in Zavvi’s May the 4th LEGO sales.

During its ongoing Star Wars Day deals, Zavvi is offering 75308 R2-D2 at a better price than ever. It can be bought from the retailer for just £139.99 – allowing you to make a 20% saving on the RRP. The set is showing at £149.99 on the Zavvi site, but there’s a further £10 off the price when you enter code ZAVVIFLASH at checkout.

If you’ve been wondering whether to pick up this set, now is the perfect time to do so. You’ll need to be quick though as the promo code is only valid until 12pm on Friday May 6. 75308 R2-D2 has sold out at other retailers during the current May the 4th 2022 promotion, so it’s a good idea to move quickly if you’re interested in this model.

While the set doesn’t directly reference it, this is a great way to honour the 20th anniversary of Attack of the Clones. Released on May 16, 2002, R2-D2 makes a major appearance in the film and shows off some of his more exciting functions. If you’re a fan of the prequel era, this version of R2 is a solid addition to your collection.

75308 R2-D2 is a large-scale LEGO recreation of our favourite astromech droid. Although the Ultimate Collector Series has explored this subject matter before, this version, first released in 2021, is the most detailed yet.

It also enjoys a slightly wider appeal than most releases in the Ultimate Collector Series. Like all the LEGO Star Wars UCS models, it’s designed as a display piece first and foremost, with an accompanying information plaque to make that idea clear. However, it also boasts an impressive degree of interactivity.

This version of R2-D2 can extend various tools from his front compartments – or fold them away when they’re not in use. His head contains some hidden delights too: a periscope, as used in The Empire Strikes Back, can be raised from one corner, while another compartment containing Luke Skywalker’s lightsaber can be opened as well. A third leg concealed in R2’s body can also be deployed if you want to ‘drive’ R2-D2 around.

75308 R2-D2 will only be available with this 20% discount until midday on Friday May 6. As one of the most exciting May the 4th LEGO deals that Zavvi is offering in 2022, enter code ZAVVIFLASH at checkout to access the special price of £139.99. Make sure to act fast, as this set may not hang around for long again with this price reduction.

Click through this affiliate link to view the full LEGO Star Wars range at Zavvi now.

Support the work that Brick Fanatics does by buying your LEGO Star Wars Day deals through our affiliate links.