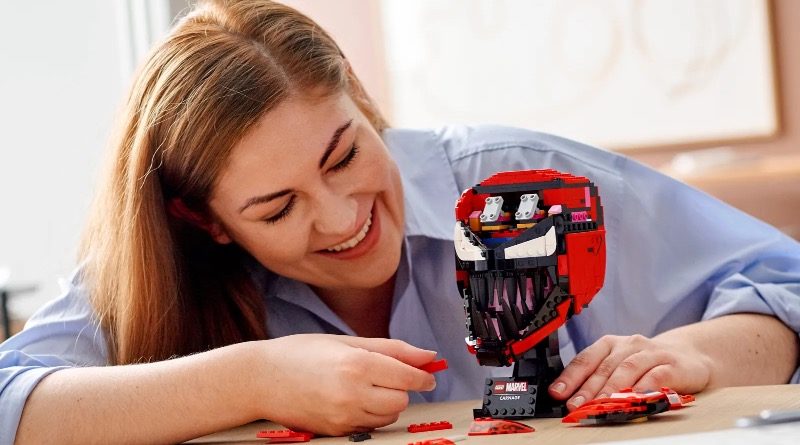 Venom: Let There Be Carnage has been delayed from its planned June release date, meaning LEGO Marvel 76199 Carnage will now launch way ahead of its tie-in movie.

The recently-revealed bust isn’t officially based on the upcoming sequel, but it’s pretty clearly the reason why the LEGO Group has elected to cover a relatively obscure Spider-Man villain ahead of other, more iconic characters in the Marvel pantheon.

76199 Carnage is due to launch on May 1 in the UK and April 11 in the US, where it can already be pre-ordered. And that would have been perfect timing for Venom: Let There Be Carnage’s original premiere date of June 25 – but the shifting sands of cinema release windows aren’t letting up in 2021, and Sony’s superhero bonanza has now moved to a September 17 debut.

This isn’t the first time the coronavirus pandemic has caused the follow-up to 2018’s Venom to change course, but this particular instance wasn’t prompted by the closure of cinemas, with more sites worldwide either already open or expected to be allowing customers in by June. Instead, Sony’s hand has been forced by Universal shifting its Fast & Furious sequel F9 to the same weekend.

It’s also not the first time a LEGO Marvel set will have launched months ahead of its corresponding movie. The accompanying film for last year’s 76162 Black Widow’s Helicopter Chase still hasn’t arrived in cinemas, for instance – though based on December’s catalogue images, it looks like the LEGO Group has at least managed to delay its planned Eternals sets in line with the movie’s shift to a November release.

If you want to fill the symbiote-shaped hole Venom: Let There Be Carnage will leave in your life from June through September, 76199 Carnage’s sinister sculpt is only six short weeks away in the UK, or less than a month away in the US.