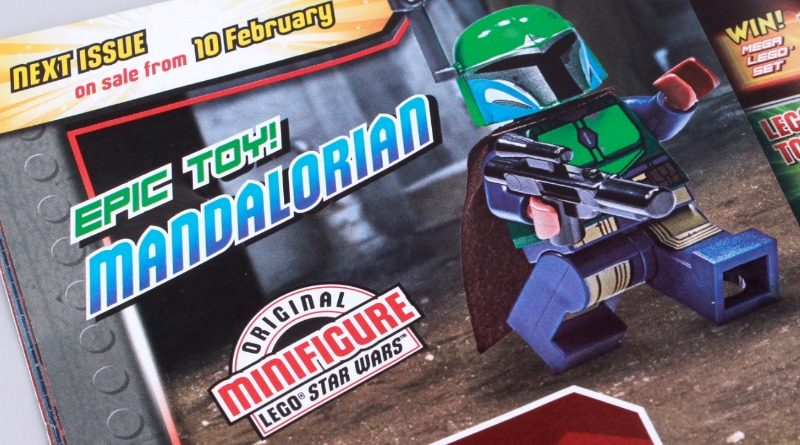 Issue 68 of the LEGO Star Wars magazine may include a brand new minifigure from The Mandalorian.

The back pages of Issue 67 preview next month’s instalment of Immediate Media’s long-running title, which is due to arrive on February 10. And while the free, foil-bagged Mandalorian minifigure it promises to include looks very similar to the one from 75267 Mandalorian Battle Pack, it may actually be a slightly different variant.

It’s tricky to tell from the colours used on the page, but the dark blue colouring on the torso and legs could just as easily be purple. It would represent a tiny difference from the existing Mandalorian Warrior included in the official set, so hardly seems worth the effort, suggesting it’s likely just the minifigure we’ve all got a few of already.

But if that is the case, why does the magazine proudly proclaim that it’s an ‘original minifigure’? That’s definitely not the case if it has been plucked from the battle pack, so either the label is misleading, or we genuinely are looking at the LEGO Star Wars magazine’s first brand new minifigure.

We won’t really know for sure until someone gets hold of a copy of the actual magazine and tears into the foil bag. Given it runs a few weeks ahead in Germany, we hopefully won’t have to wait too long for someone to pick it up. If nobody does, though, we’ll be sure to bring you confirmation as soon as we get our hands on our copy.

You’ll be able to snag Issue 68 of the LEGO Star Wars magazine and find out for yourself from February 10. This month’s issue includes a free buildable TIE Interceptor, which you can take a closer look at here.