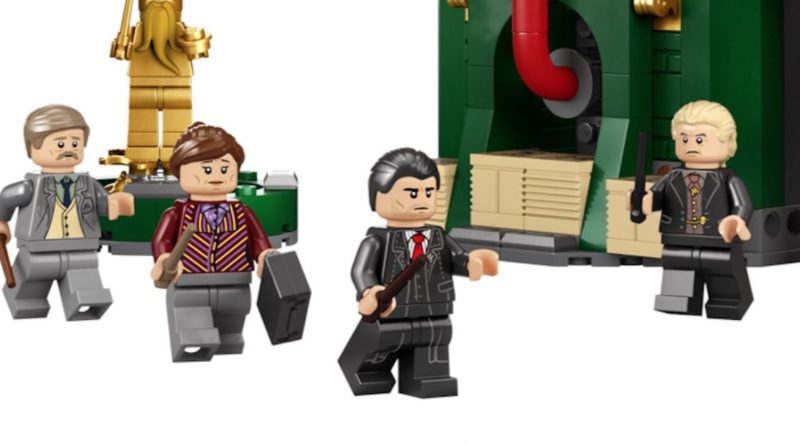 As recently reported, seven brand-new LEGO Harry Potter sets have been revealed for release this summer. Fans of the Wizarding World can get their hands on the latest wave of sets in June and the range also includes 76403 The Ministry of Magic, the first based explicitly on Harry Potter and the Deathly Hallows.

The seven sets also feature a whopping 39 minifigures in total, many of which are making their first ever appearence in plastic form. Here are eight LEGO Harry Potter minifigures that will be all-new additions to the Wizarding World:

A high-ranking Ministry of Magic official, Runcorn was also an investigator of alleged Muggle-born. Harry Potter used a Polyjuice Potion to disguise himself as Runcorn in order to make his way into the Ministry.

An assistant in the Improper Use of Magic Office, Mafalda was impersonated by Hermione Granger during an infiltration of the Ministry. Hermione used some of Mafalda’s hair in her Polyjuice Potion.

Employed in the Magical Maintenance Department, Reg Cattermole was tricked into taking a Puking Pastille by Hermione Granger. Ron Weasley then disguised himself as Reg to break into the Ministry of Magic.

Wife of Reg, Muggle-born Mary Cattermole was put on trial for allegedly stealing the wand of a pure-blood witch or wizard. With the help of Harry, Hermione and Ron, she managed to escape from the Ministry.

Under the Imperius Curse, Pius Thicknesse became the puppet Minster of Magic for Voldemort. He later fought alongside the Death Eaters in the final magical battle at Hogwarts.

A Dark Wizard and Death Eater, Yaxley was Head of the Department of Magical Law Enforcement when Voldemort was in control of the Ministry. He was later defeated in battle by George Weasley and Lee Jordan.

Librarian at Hogwarts School of Witchcraft and Wizardry, Madam Pince was highly-protective of its books. She was skilled in jinxing and hexing spells, while also able to lift counter-curses from hapless students.

Sirius Black’s house-elf, Kreacher also once served Lord Voldemort himself. He considered Sirius a blood traitor and lied to Harry Potter about his master’s location, ultimately resulting in Black’s death.