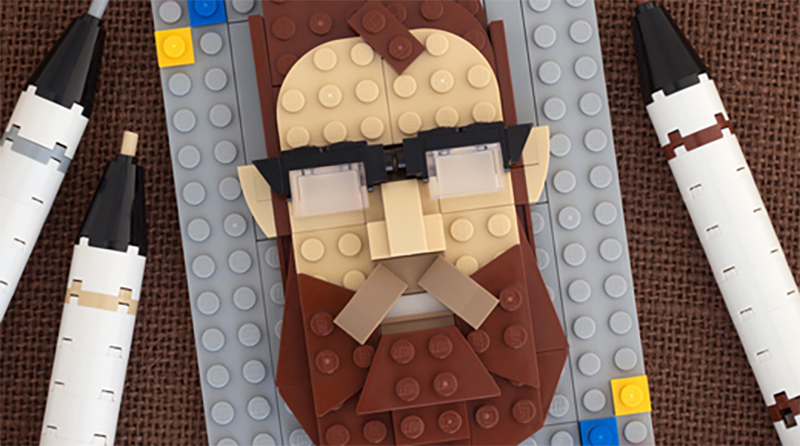 Chris McVeigh realised the dream of many fans by getting a job at the LEGO Group. In this exclusive interview, he reveals what it is like to go from being a fan to a Model Designer

Today sees the launch of LEGO Brick Sketches, a theme that had an unusual journey to release. It started like as a series of builds that LEGO fan Chris McVeigh was building and sharing on social media. Several years later, he got a job at the LEGO Group and pitched the concept. It was given the greenlight and now fans around the world can build in Chris’s style.

Brick Fanatics interviewed Chris to find out more about his background as a LEGO fan and what it was like to join the company.

How long have you wanted to work for the LEGO Group for?

I guess I have wanted to work for LEGO since I was a kid. It was one of those things, growing up in a remote town in Canada you feel like you have limited options. When I was a kid I loved building LEGO, I loved being mildly sick so I could stay home from school and just build this big LEGO town, see if I can build all these apartments and this city layout… if you asked me at that point, I would say, ‘I want to build LEGO forever’. I don’t think I really fine-tuned that I wanted to be a LEGO designer at that point because as I said when you grow up in a small town, you don’t feel that these are really options and maybe people around you don’t communicate that these are options.

After I went through my teenage years and went into adulthood I think that with the internet things start to become a little bit more within reach so when I got back into LEGO I still didn’t really have any direct aspirations to work for the company. As my posts and my photos gained traction, people would say to me ‘you should work for LEGO, you should work for LEGO’ and I discounted that for a very long time. I think again it was because I was in Canada, LEGO was in Denmark, it seemed like a very far way to go and it just didn’t seem in reach. But again, I think the internet really brings things a lot closer.

Within the past couple of years I started to think about it more and more and at some point I decided, ‘I am just going to apply. I am just going to apply and see what happens.’ And obviously things went quite well and here I am in Denmark now, very far away from Canada and it’s exactly where I want to be. You always worry ‘if I travel across the ocean, am I actually going to want to live there, am I actually going to be happy there?’ and I have no regrets, it is really just been such a rewarding experience already and I have only been here for 15 months.

Well it started with just an application and a portfolio then you go through a process, if they like what you do then you might get invited for a workshop then you get selected for a job. There’s nothing overly mysterious about the process, it works like other creative jobs.

The thing that amazes me most is just how many people speak English. English is clearly a very prominent second language in Denmark. I was a bit concerned about whether I was going to be able to function over her. I grew up in Quebec, so I grew up in a predominantly French community but I was English, so I was used to hearing other languages as the main languages around me. I took French in school for years and I can speak it but I don’t have confidence in speaking it.

I didn’t have any fear but I was pleasantly surprised when I came over here and literally everyone speaks English. I think that is just wonderful. So many people here, even kids, teenagers, they speak English so well and I’m like, ‘wow, I really wish I would have levelled up my French a bit’

It has been a good experience, it’s been a very easy adaptation. Some people will say you might find it difficult, I think maybe given my background, growing up in Quebec, and people already setting expectations, then coming here and wonderful surprises with so many people being so friendly and speaking my language, it’s made it a really fun experience for me rather than something that maybe might stress out other people.

Have you been able to design anything other than Brick Sketches so far?

I work for the Creator Expert team, Creator Expert/Architecture, or I guess as you know we are changing that name. That is the department I work for primarily and I have been doing products in that department that I really enjoy. So the answer to the question is yes.