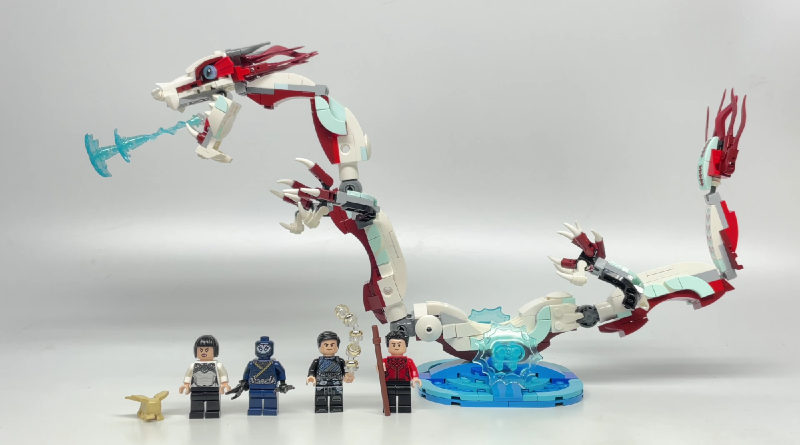 After an early arrival in stores, we’re now getting our first look at LEGO Marvel Shang-Chi and the Legend of the Ten Rings 76177 Battle at the Ancient Village thanks to a new review.

We haven’t even received a trailer for the new Marvel film, but already the sets are starting to appear in stores worldwide, meaning some lucky fans have been able to get their hands on them.

Just2good is one of those fans and was sent 76177 Battle at the Ancient Village by The Brick Teach, who themselves found it early at a local store. The model, which features an ancient dragon build, is one of two for the movie – the other of which has also been found early in retail locations.

The build includes 400 pieces and four minifigures, not to mention a new piece for the winged companion, Morris. We already received a close look at the model before thanks to a find in Israel, but this is by far the most detailed look at the upcoming superhero set yet.

“I like how they integrated a stand as also a landscape build but yeah, for the scenery part of this being called ‘Battle at the Ancient Village’ it’s lame that there’s no village designs” commented the LEGO YouTuber as part of his final thoughts.

There’s currently no word on when the Shang-Chi sets will release and officially, the film has only had the logo revealed. With the movie releasing September 3 it may still be some time before a reveal or even a trailer, following delays for much of the Marvel Cinematic Universe amidst the pandemic. However, we’ll keep you updated when we learn more.