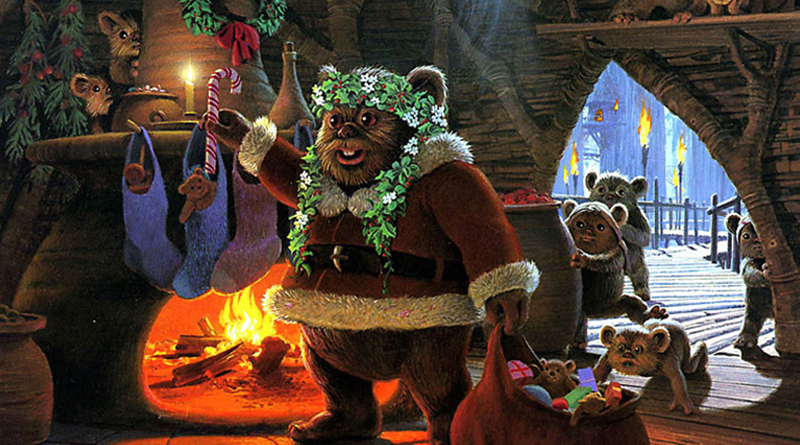 After Star Wars: A New Hope took the world by storm, Lucasfilm began a tradition of sending out Christmas cards to its employees and associates. At first, director George Lucas tasked legendary concept artist Ralph McQuarrie to design these cards and his feative art, such as Santa Claus Yoda and festive C-3PO along with R2-D2, remains the most famous. As Lucasfilm and its many sub-companies developed, other artists contributed their talents to the Christmas cards, resulting in a wide array of styles and content.

Many of the best exclusive minifigures in the LEGO Star Wars Advent Calendar have been directly inspired by this Christmas Star Wars art. As noted before, recent choices have strayed away from this reference, and have been rather disappointing.

Perhaps the LEGO design team should go back to the Lucasfilm Christmas cards for inspiration – so as this is a busy time for list making, Brick Fanatics shares a festive figure wishlist… 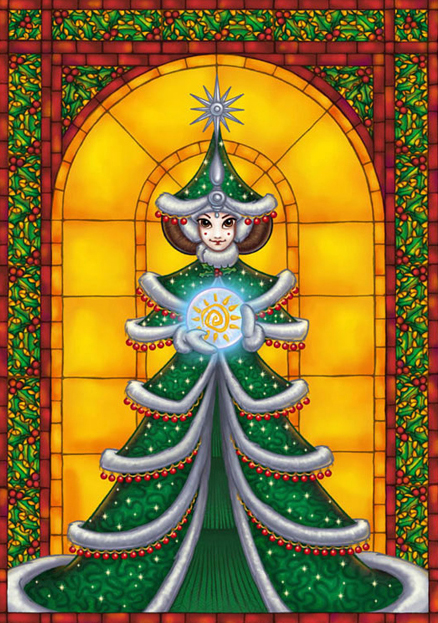 For some strange reason there has never been a female festive minifigure included in the eight LEGO Star Wars Advent Calendars so far. Padmé Amidala dressed in a gown that looks like a Christmas tree was the Lucas Learning Christmas card from 2000, designed by Maryn Roos. This could wasily be printed onto a minifigure of Padmé because the moulds for her huge dress and flamboyant hairdo already exist from 9499 Gungan Sub. The orb that the Queen of Naboo is holding could use a round tile printed with a sun symbol, which would easily fit into the claw-hands of a minifigure. 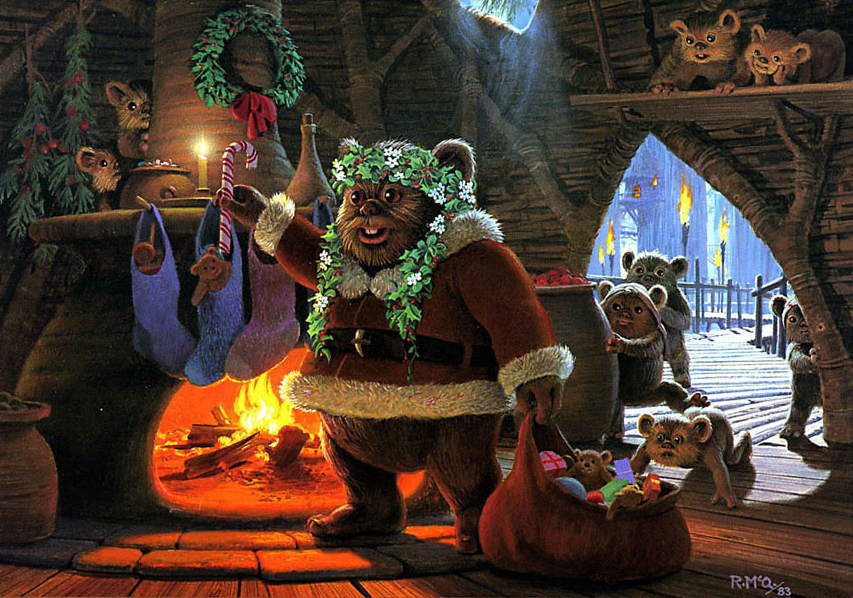 To coincide with the cinematic release of Return of the Jedi, the Lucasfilm Christmas card from 1983 was an ewok dressed as Santa Claus painted by Ralph McQuarrie. Dressing up Star Wars characters as Father Christmas is the most popular choice for the LEGO designers, and what could be more adorable than an ewok printed in a Santa suit with some holly around its head? The Advent Calendar would also be an excuse for the LEGO Group to finally make a mould for a baby ewok – so ewok Santa can have someone to deliver gifts to. 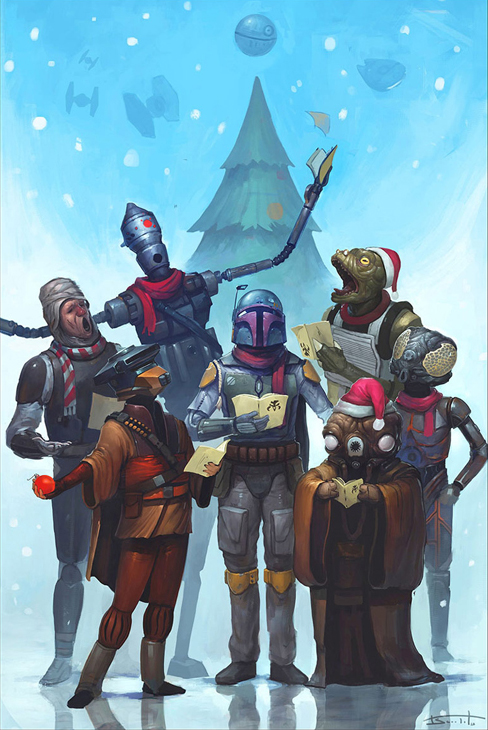 Industrial Light and Magic artist Tyler Scarlet created the Lucasfilm Christmas card for 2013, taking some artistic license with the most recognisable bounty hunters. LEGO Star Wars Advent Calendars usually only contain one character with a festive makeover, but a troupe of carolling bounty hunter scum would lead to excitement throughout the month rather than just the final door. Since the release of 75167 Bounty Hunter Speeder Bike Battlepack there are minifigures of every bounty hunter, so it would just be a matter of printing scarves and red-noses. 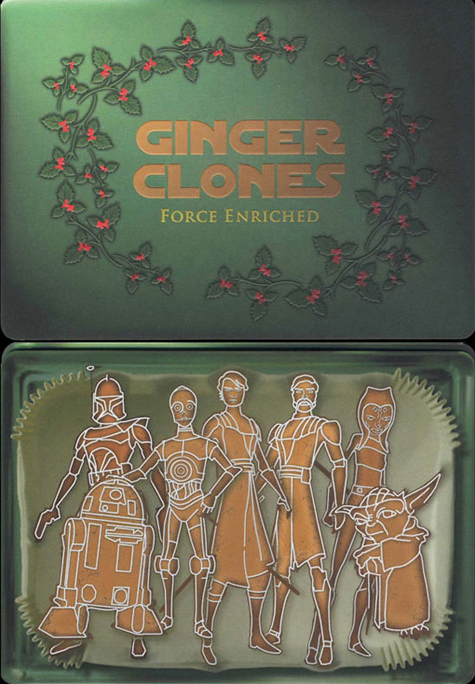 Gingerbread – the most quintessentially Christmassy of all biscuits. With the excitement around The Clone Wars series, artists Harrison Parker and Kelly Smith let the main characters take centre stage in the Lucasfilm Christmas Card for 2009, although with a biscuity twist. No The Clone Wars character has yet become the exclusive figure for the Advent Calendars, and as Ahsoka was introduced in the series then she would make perfect sense. Gingerbread printing has already appeared in 5005156 Gingerbread Man, and would just have to be transferred onto Ahsoka, whilst her usual green lightsabers could be swapped for white ones to mimic icing. 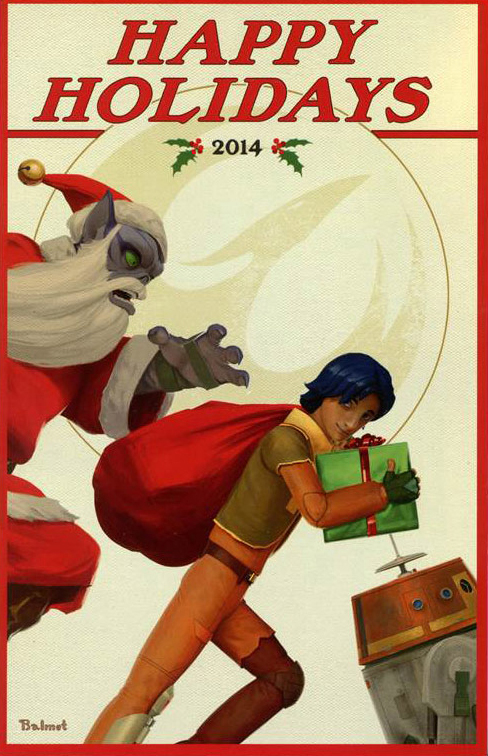 There is no doubt that Ezra Bridger would be on the naughty list, as emphasised by JP Balmet’s illustration for the 2014 Lucasfilm Christmas card. Considering the fan-following that Star Wars: Rebels has, surprisingly very little material from it has been adapted into the Advent Calendars. The tough yet kind Zeb would make the perfect Father Christmas, and we have only ever had one minifigure of the Lassat, included in 75053 The Ghost from 2014. Aside from needing the iconic red suit, Zeb could do with an updated head-mould that makes him look a little more jolly for Christmas.

The LEGO Group no longer has a niche in the market when it comes to SStar Wars Advent Calendar, with toy manufacturers like Hasbro and Revell also beginning to offer their own. The company need to make sure that the exclusive minifigure, which is the main draw of the set, keeps being appealing enought to pull fans in.