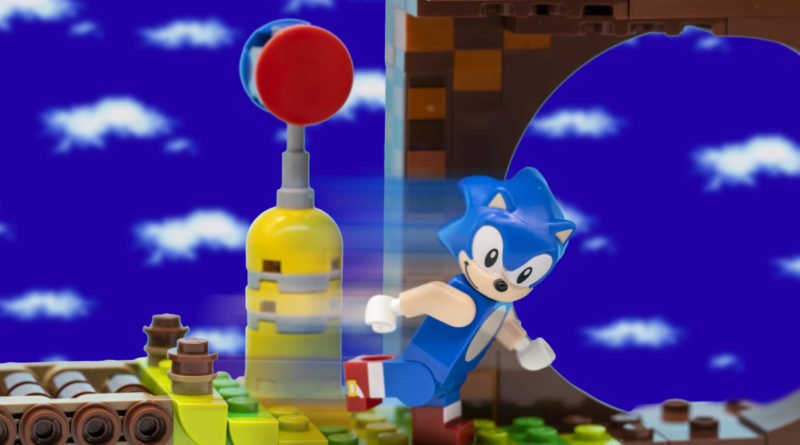 Paramount Pictures has released the final trailer for Sonic the Hedgehog 2, which releases in cinemas from April 1. Following a rocky start, the original movie turned out to be a surprise hit with audiences. The sequel expands the world of the film, and introduces favourite characters like Tails and Knuckles to the big screen. A Knuckles spinoff show has also been confirmed.

Sonic has only made a couple of appearances in LEGO form, but his most recent appearance (in 21331 Sonic the Hedgehog – Green Hill Zone) seems ripe for expansion. With a long history in video games, there are plenty of locations from the games we’d love to see in LEGO form.

This location first popped up in Sonic the Hedgehog 2, and is one the series’ most famous locations. The industrial facility is filled with malevolent robots and pools of toxic Mega Mack, as well as a bangin’ soundtrack. It’s also earned tributes in games such as Sonic Generations and Sonic Mania.

Given its popularity, a version of this would make sense for an expanded Sonic theme. The blue and yellow slopes and floating platforms would translate well to LEGO, as would the Spiny and Grabber badniks. Other icons of the zone (like the heart-stopping drowning music) may prove trickier to recreate.

Debuting in Sonic the Hedgehog 3, this zone sees Sonic sliding into action on a snowboard before braving the icy caverns below. It seems to be referenced in various Sonic 2 movie scenes, given the snowy environments that are appearing in trailer footage.

In addition to familiar features like loops and ramps, the zone features plenty of trees and destructible walls. Since the LEGO Sonic set has worked to recreate some gameplay features, this zone would be a great fit.

This zone appears towards the end of Sonic and Knuckles, and features aerial ruins floating in the sky. It offers a mix of old and new technology, with EggRobos swooping in to stop Sonic and Knuckles in their tracks.

This is another zone that’s earned multiple renditions in Sonic games, and would allow for a shakeup of conventional LEGO environments. With rumours of a LEGO set using tensegrity (which gives objects the illusion of levitation) a LEGO set recreating this could also put it to good use.

This night-time area appears in Sonic the Hedgehog CD, and offers highways built from musical instruments. Like the other levels in the game Stardust Speedway appears in one of four guises, with your actions in the past determining how it appears in the future. However, its ‘default’ version is certainly attractive.

Stardust Speedway offers a fast-paced, chaotic environment in the game, as well as highly distinctive architecture in any time period. It’s also the scene of a showdown with Metal Sonic, one of Sonic’s robotic doppelgangers. This alone offers some intriguing creative possibilities for a hypothetical LEGO model.

The elusive Special Stage appears throughout the Sonic franchise, and is home to the Chaos Emeralds – the ultimate goal in many Sonic games. Its form factor radically shifts from title to title; in early releases it appears as a spinning maze, a ring-filled chute and a spherical planetoid. However, it is usually colourful and psychedelic, making these areas some of the Sonic series’ most memorable.

Since the LEGO take on Green Hill includes all seven emeralds, a LEGO Special Stage would be a solid companion. While there are many possibilities here, a version of the spinning maze from the original Sonic game might make the best centrepiece. It could even offer some actual gameplay in a similar fashion to 21305 Maze, of the LEGO Ideas range.

While wider product collections have spun off from the Ideas range, it’s possible the LEGO Sonic set will remain a one-off. Still, given the blue blur’s continued popularity – and the growing collection of video game-inspired LEGO sets – overlooking these possibilities seems like a strange move on the LEGO Group’s part.