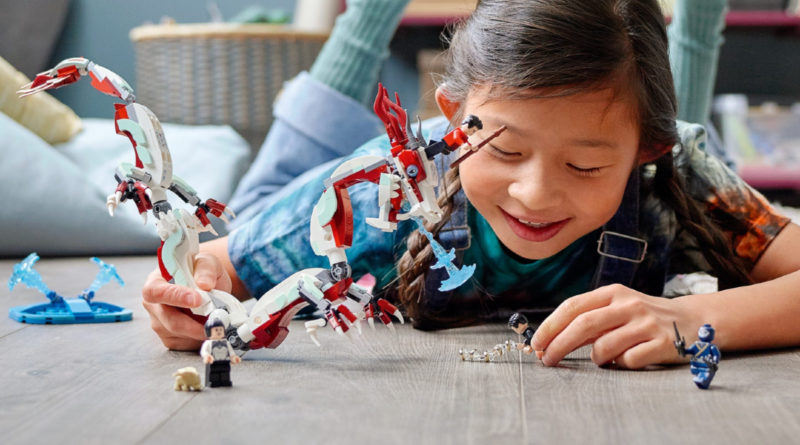 Marvel Studios’ Shang-Chi and the Legend of the Ten Rings is now out, but how can the LEGO Group’s official sets compare to the film?

For those who have yet to watch the latest movie in the Marvel Cinematic Universe, you might want to click away as we’ll be covering plenty of spoilers for Shang-Chi and the Legend of the Ten Rings in this article.

The two official LEGO Marvel Shang-Chi sets are available now worldwide, and unlike the other models released for Black Widow, the pair represent particularly authentic depictions of scenes taken directly from the movie.

The smaller of the two, 76176 Escape from The Ten Rings, depicts the moment when the team rebels against the Ten Rings and attempts to flee the organisation under the guidance of Morris, a mythical beast who can guide them to the magical realm of Ta Lo.

The turrets included may not feature in the chase but they do match the overall design for the crossbows used to subdue the Ten Rings opponents in Ta Lo.

The presence of motorcycles and a damaged car all match the scene in the garage, though Wenwu was not present at the time and could have been swapped out for an updated Trevor Slattery minifigure, with the character returning after his debut in Iron Man 3.

The bright yellow car also features a different paint job in the movie with colourful graffiti for Razorfist’s personalised vehicle, though that may have not been the case in concept art.

The larger of the duo of models, which includes only one build for the Great Protector is also just as accurate to the film, with even minor details such as the specific model used for the splashing water tying into a featured moment of the movie.

Whilst Death Dealer was not as involved in the final battle at the ancient village, his inclusion here is still authentic to the film. Otherwise, both Shang-Chi and Xialing could be seen riding the dragon as they attempt to thwart The Mandarin, meaning even the 30454 Shang-Chi and The Great Protector polybag is accurate.

Overall, the LEGO Marvel Shang-Chi and the Legend of the Ten Rings sets are two of the more accurate sets in the theme, a list that now includes the likes of 76192 Avengers: Endgame Final Battle thanks to the recent Infinity Saga summer wave. Both LEGO Shang-Chi models are available now from the official online store.