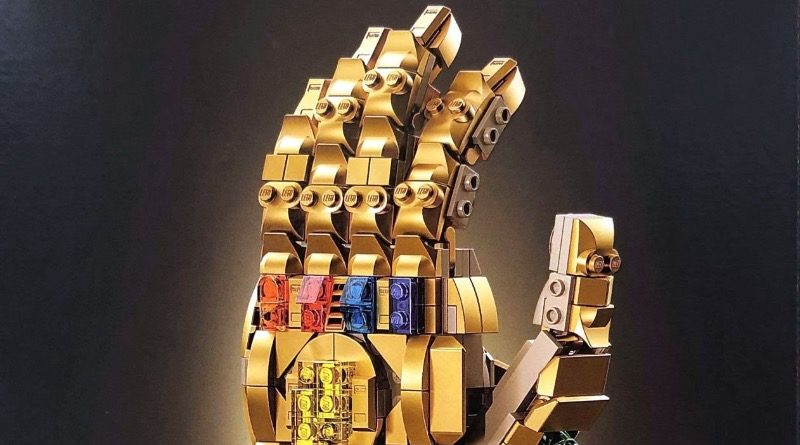 The newly-revealed LEGO Marvel 76191 Infinity Gauntlet may be about to set a new record for the LEGO Group.

A British department store has finally lifted the lid on this summer’s LEGO Marvel sets, which dive back into key moments in the Marvel Cinematic Universe across their ‘Infinity Saga’ branding. But while four of the five sets revealed so far concentrate on minifigure-scale scenes, one hews closer to the likes of 76165 Iron Man Helmet as a pure display piece.

76191 Infinity Gauntlet recreates Thanos’s tool of mass universe reconfiguration at a scale that may or may not be incredibly close to life-size (it’s pretty tricky to tell from a single box pic). And while that sounds great on paper – just as it did when rumours of the set first emerged in March – the on-screen gauntlet is pure gold, and any LEGO version is therefore going to live or die on its colour scheme.

Thankfully, it looks like the LEGO Group hasn’t skimped out with basic warm gold bricks, and has instead packed in enough drum lacquered gold parts to make King Midas blush. The only question now is: will it take the crown from 80012 Monkey King Warrior Mech for the most drum lacquered gold elements in a single set?

That 2020 Monkie Kid model made headlines across the LEGO community for its ample use of the super shiny coating, with a total of 119 drum lacquered gold bricks in the box. Given the set only has 1,692 pieces in total, that’s a sizeable percentage of the parts that make up the monkey mech.

Now, it could be on the brink of losing its title to 76191 Infinity Gauntlet, which layers an incredible number of drum lacquered gold elements over a dark tan base. It’s impossible to tell from that single box photo exactly how many pieces come in the coveted colour, but if they continue on to the reverse of the gauntlet – as the image seems to be teasing – the number could soar beyond 119.

We’ll have to wait for 76191 Infinity Gauntlet to hit shelves (at least beyond that one British store) to find out for sure. We’re still expecting that to happen on June 1, but we’ll bring you confirmation as soon as we hear it from the LEGO Group.