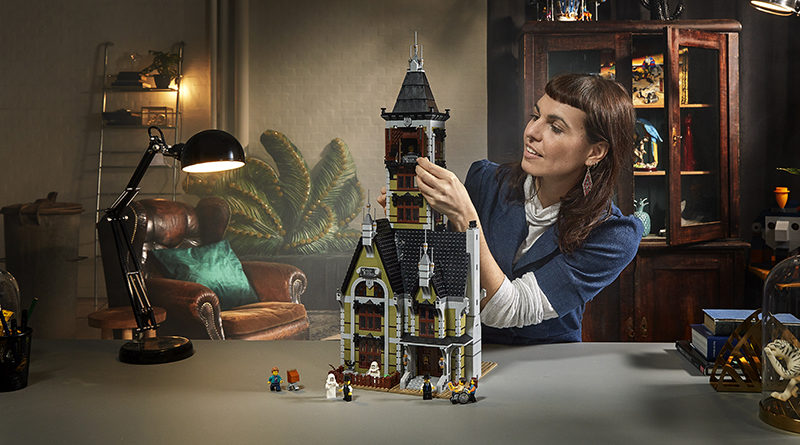 Does a first eye cast across LEGO 10273 Haunted House see either an impressively spooky abode or a sufficiently thrilling fairground attraction?

The first LEGO Creator Expert to no longer feature that branding has been annoucned. 10273 Haunted House continues the fairground series from within that theme, this time around bringing a drop ride hosted within a creepy castle-like house.

My first reaction to LEGO 10273 Haunted House set was, ‘oh dear, this is a big step down from 10228 Haunted House’. That incredible set has been sitting at excessively high prices on the secondary market, so I assumed that like 10256 Taj Mahal and 75192 Millennium Falcon, the LEGO Group had decided to revisit it and offer a new version to fans.

It was only after flicking through the images that the ride component became apparent. This was a fairground set? How had I missed it? Going back to the boxed image, I figured out why. ‘Fairground Collection’ is printed in tiny, small font, while ‘Haunted House’ is huge. Most people who glance at this set on a shelf will mistake it for a haunted house (i.e. not a fairground attraction, but an actual spooky building), and it does not measure up to 10228 on that basis.

The new, minimalist box art has not done this set any favours – with a bit of fairground painted around it, people would immediately understand that this is not a literal haunted house but a haunted house ride.

Enough about that though, and onto the set itself. As mentioned, it is not visually as striking and clean as 10228 Haunted House. It looks fine from the exterior images, but the height does not help it have the classic haunted house look – that is not a huge issue though, as this is focused on being a ride. It does look like a creepy building and has an appropriate colour scheme.

As for the interior, it is an interesting concept, but not the best for a fairground haunted house. There are rides like this out there of course, the most famous example being Walt Disney World’s Tower of Terror, which is a spooky building containing a drop ride. Typically though, haunted houses are walk through or ride through attractions full of scares – especially at a fairground with a rickety rollercoaster and carousel.

While it is nice to see nods to classic LEGO sets, the Adventurers connection here is misplaced. Why is a haunted house set being linked to the classic Indiana Jones style theme? A pyramid, a temple or a classic bi-plane would be sensible sets to connect to the Johnny Thunder era, but a haunted house is not.

21322 Pirates of Barracuda Bay is absolutely packed with references to classic LEGO Pirates… because it is a set all about pirates. While it feels like a similar attempt has been made here, the connection simply isn’t there and it makes for an odd juxtaposition. Where there should be cobwebs, spiders and creepy old paintings there are hieroglyphics, gold artefacts and sand coloured statues.

The organ is a nice touch, put together in a very clever way and feeling much more appropriate for the theme. A ticket desk enhances the ride aspect, with the central column dedicated to cranking the minfigures right up to the top, before they quickly fall and feel their stomachs turn. It looks like a fun function.

Another nice touch with this set is that it completely closes. There is no open back here, the model is a complete building that can be opened up to reveal the interior. It feels slightly retro for a set to be hinged in this way.

The only way to truly know how satisfying 10273 Haunted House is as a LEGO set will be to build it, but based on this first glance, it does not feel as immediately iconic as previous fairground sets – 10261 Roller Coaster, 10257 Carousel and 10244 Fairground Mixer. On top of that, whether the mish-mash of haunted elements and Adventurers touches work together is up for debate. Given the consistently high quality of the most sophisticated LEGO sets, not every one can immediately jump out as something near-perfect, so perhaps fans are due one that falls a bit short.