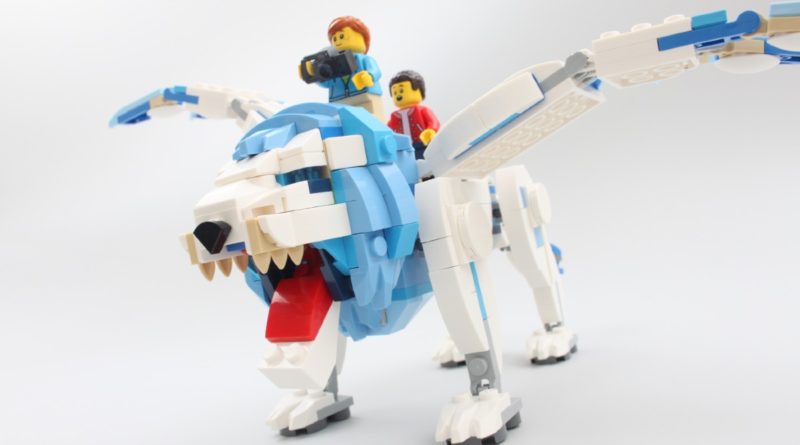 MYTHICA is the latest themed area of LEGOLAND Windsor, and now it’s got its own impressive LEGO set to immerse you in this mystical world.

LEGOLAND parks have an exclusive range of LEGO sets, based on attractions and experiences but they usually focus on rides that can be found in multiple locations to presumably increase their worldwide appeal. However, MYTHICA is a fully-themed area that only exists at LEGOLAND Windsor.

For that reason, the reveal that it would be the subject of the next exclusive model available at LEGOLAND resorts and LEGOLAND Discovery Centres was interesting, to say the least. Notably, MYTHICA does have a presence at other parks but only in the form of a 4D movie. This gave the design team behind 40556 Mythica a challenge – to faithfully depict MYTHICA while also making it appealing to guests at LEGOLAND resorts where the area doesn’t exist.

To address the challenge of designing a model that would be appealing to guests at resorts where MYTHICA doesn’t have a full presence, as well as LEGOLAND Windsor, the design team chose to focus on the creatures of MYTHICA, rather than the rides. These include Bits and Bobs, Maximus the Sky Lion and a pair of venus flytraps. In MYTHICA, each of these can be attributed to an attraction. Looking at it like that, you could say that the set covers The Flight of the Sky Lion ride and the Magical Forest walkthrough experience.

Maximus takes up the most pieces and he makes for an impressive model compared to the other, comparatively simple LEGOLAND sets that are also available. Whilst the LEGOLAND builds tend to offer a facade representing an attraction and a functional version of the ride for minifigures, Maximus makes it clear that this is a different kind of LEGOLAND set for a more experienced audience. However, it won’t alienate builders of all ages – it might just take them longer to put together.

The decision to focus on Maximus as the main model in 40556 Mythica makes sense considering that he features in both the main attraction of the land at Windsor and the 4D film, though those who have seen MYTHICA at LEGOLAND Windsor will also recognise him from the enormous model that looms over guests in front of his ride. Put simply, this was the obvious choice for 40556 Mythica and it’s executed in a way that feels fundamentally different from other LEGOLAND sets while still being approachable for anyone to build.

Aside from Maximus, Bits and Bobs is mostly repurposed from the model that seems to have inspired them in 10401 Rainbow Fun. The colours are remixed and one wing is replaced but otherwise, there’s nothing notable to mention. The venus flytraps are attached to some brick-built scenery that allows a stable base for them to be posed on. The addition of colour with flowers and bricks helps to sell the unkempt nature of this flora too.

Rounding out the builds in 40556 Mythica is something taken directly from LEGOLAND Windsor, setting itself apart from everything else. The gateway matches what you’ll walk through to enter MYTHICA, apart from the multicoloured bricks between the cracks, but the light blue suffices in what would have been a difficult thing to otherwise achieve with stickers.

However, it also means that the appeal of the gateway is somewhat limited in terms of recognisable MYTHICA elements since it only physically exists at LEGOLAND Windsor. Whether this will change in the future has not been confirmed, though we can appreciate the inclusion of something that is featured in the actual land of MYTHICA in 40556 Mythica.

Much of the builds in 40556 Mythica are characters in their own right, and the models are great representations of them, with Maximus featuring the same commanding presence as at the parks and Bits and Bobs being considerably more colourful and fun-loving.

Two minifigures are included as well though, representing a pair of younger guests visiting and exploring MYTHICA. There’s nothing particularly special about these characters, though the boy does include a double-sided face to express his amazement at the creatures he sees.

Their simple design makes them easily interchangeable with other minifigures from LEGOLAND sets, or any that take your fancy, though they’re not exactly a major selling point for 40556 Mythica.

Behind 40346 LEGOLAND, 40556 Mythica is the most expensive set based on the parks yet, costing £44.99 in the UK. In terms of pieces, that price is justified thanks to the 520 elements, and the volume of content you get feels adequate for that amount. You won’t be disappointed in a purchase of 40556 Mythica, largely thanks to its exclusivity, though an extra minifigure of the Hungry Troll or even another guest would have gone a long way. As it stands though, 40556 Mythica is decent value for the money and the price feels justified.

As impressive as the build of 40556 Mythica is compared to other LEGOLAND sets, its appeal can only go so far since it’s based on a property that only physically exists at one theme park. For those visiting LEGOLAND Windsor, it joins the many other models that commemorate your day depending on your favourite ride. It’s also harder to fit it in with the rest, since it doesn’t include a smaller depiction of an attraction but recreates the characters and creatures of MYTHICA instead.

In that sense, 40556 Mythica stands apart from the rest of the LEGOLAND sets and it’s not hard to imagine it being more popular with a slightly older audience than the others. It’s worth picking 40556 Mythica up if you’ve ever in a LEGOLAND park, even more so if that park turns out to be LEGOLAND Windsor. Otherwise, its appeal is ultimately limited. However, the design team have made decisions to confront this issue as much as possible, opting for a giant brick-built winged lion instead of an octagonal facade with half of a lion poking out of it.

This set was provided for review by LEGOLAND Windsor.

Support the work that Brick Fanatics does by purchasing your LEGO using our affiliate links. Thanks

How long does it take to build LEGO 40556 Mythica?

40556 Mythica should take you just over 50 minutes to build, or longer for those less experienced with bricks.

There are 520 pieces included in 40556 Mythica, making up two minifigures, Maximus the Sky Lion, Bits and Bobs, the gateway and the two venus flytraps.

In 40556 Mythica, Maximus is the largest model and measures 10cm tall, 29cm wide with the wings stretched out and 18cm deep. The gateway comes next at 11cm tall, 12.5cm wide and 5cm deep. The other builds should be small enough to easily fit in your collection.

MYTHICA is the name of the new themed land at LEGOLAND Windsor, a world of mythical creatures born from imagination. It’s also the subject of a 4D movie at other parks around the world.