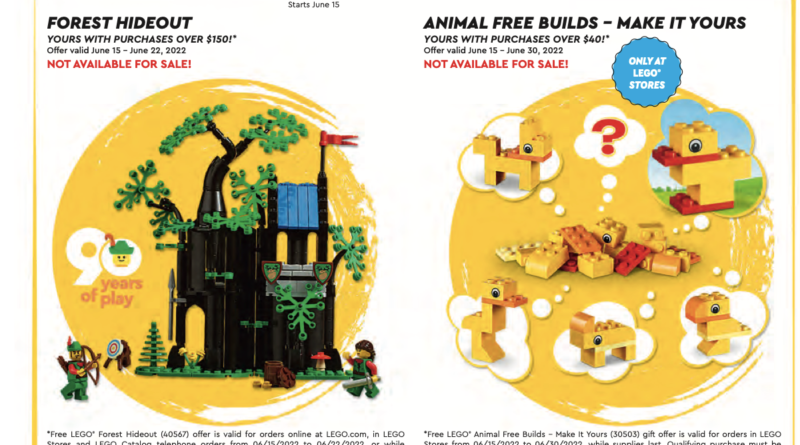 An American LEGO catalogue has shone a light on the attractive 40567 Forest Hideout set, which will be available from June 15 to June 22.

The LEGO Group is celebrating its 90th anniversary this year, with a number of different LEGO sets hopefully releasing to honour the occasion. We’ve already received one in the form of 11021 90 Years of Play – a new release in the LEGO Classic line. However, it’s also to be hoped that sets aimed at the older LEGO fan will be released as well.

While we haven’t received confirmation of any conventional product releases in this area, we’re pleased to reveal details on 40567 Forest Hideout. This is a promotional item that recreates 6045 Forestmen’s Hideout – a Castle set released back in 1988 – with modern parts and construction techniques. The details of this new set can be found in an American LEGO catalogue via Jay’s Brick Blog.

The catalogue (which you can view for yourself here) gives us an excellent look at the set, and also confirms the price threshold for acquiring it. Within the US you’ll need to spend $150 on LEGO products, either at LEGO.com or an official LEGO Store. The price thresholds for the UK and Europe (assuming it releases in these territories) aren’t confirmed, although we suspect they’ll be £150 and €150 respectively.

The catalogue also shows that another set, 30503 Animal Free Builds – Make It Yours, will be available with purchases of $40 or more in physical LEGO Stores. It’s unclear for now if a similar promotion will appear overseas.

If you’re a LEGO VIP member, the catalogue also reveals two upcoming rewards in the VIP Rewards center. The new items include a poster documenting the evolution of the LEGO logo, and a lenticular sticker of the iconic wooden duck in LEGO form. However, these may prove less appealing than a discount on more LEGO sets.

As such, we suggest you start planning how you’re going to hit the $150 threshold – we imagine this new promotional set will be extremely popular. Fortunately, with plenty of new LEGO releases this month this shouldn’t be too difficult.