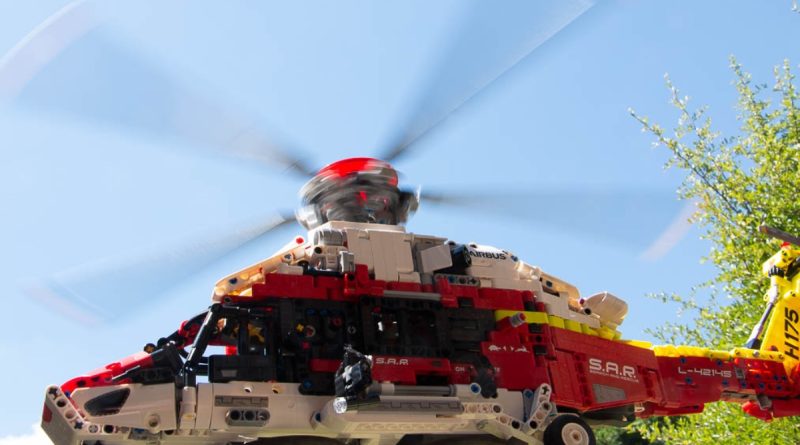 42145 Airbus H175 Rescue Helicopter is one of the most fascinating LEGO Technic sets you can buy. If you’re looking for a challenge, step this way.

Easily the largest LEGO Technic helicopter ever produced – by some margin – the new 42145 Airbus H175 Rescue Helicopter has the potential to be something special. It’s also the first helicopter to be modelled on a real-world design (we’re going to turn a blind eye to the ill-fated Bell Boeing V22 Osprey from 2020). It’s a set that will be relished by experienced Technic collectors combining, as it does, a great display model with a challenging build.

Before starting on the build itself, it’s worth taking a moment to consider how a helicopter works, to truly appreciate what the designer has managed to achieve with this set. To quote the American journalist, Harry Reasoner: “An airplane by its nature wants to fly… A helicopter does not want to fly. It is maintained in the air by a variety of forces and controls working in opposition to each other, and if there is any disturbance in this delicate balance the helicopter stops flying; immediately and disastrously.”

A helicopter pilot has three controls at their disposal to avoid an ‘immediate and disastrous’ cessation of flight. Firstly, the collective, which is the control that looks like a handbrake. This controls the angle of the main rotor blades. Unlike a car, where an increase in engine speed results in acceleration, a helicopter engine runs at constant speed, and lift is generated by the blades being angled more steeply.

The main joystick, or cyclic, controls the angle of the whole rotor assembly. Dip the rotor forward, and the helicopter moves forward. Dip it left and the craft flies left. This whole rotor structure has to be able to move at the same time as the rotating blades are being adjusted by the collective.

Lastly, the pilot has foot pedals to control the tail rotor. Without this, the helicopter would simply spin thanks to the torque from the main rotor. Using the pedals, the pilot controls which direction the nose of the helicopter points in.

Opening the box to 42145 Airbus H175 Rescue Helicopter, you’re presented with 16 bags, numbered one to five, plus an extra bag containing the main rotor blades, and separately, a battery box and large motor. One of the first steps is to install six AA batteries in the box, which will require a small cross-headed screwdriver. The three bags that make up phase one build the base of the chassis, which is a straightforward affair.

However, care needs to be taken at step 19 as a central segment is hinged forward. If the yellow 1×2 element with axle isn’t kept horizontal at this stage, you may find yourself doing substantial remedial work later. Don’t ask us how we know.

Bags two and three are where you will need to bring your ‘A’ game. As the build progresses you realise that not only has the designer managed to incorporate a collective control but a cyclic too. It’s a difficult few hours and you’ll need to study the instructions very carefully indeed to ensure that you don’t put a foot wrong.

The cyclic, controlled by the joystick in the cabin, moves freely but the collective control, which can be operated from within the cabin or by a lever on the side of the model, feels stiff, and you may wonder if you’ve made a mistake. The control has limited movement, so as long as the lever can be moved by about 45 degrees, you should be okay.

By comparison, bags four and five, which add the tail and the rest of the superstructure, are a walk in the park. Along the way you’ll add 37 stickers, most of which are decorative and emphasise that this is most definitely a Search and Rescue craft and in no way a military vehicle. If stickers aren’t your thing, most can be safely omitted but they do enhance the look of the finished model, and a handful are required to make it clear what the various controls do.

There are no minifigures included, as is customary for a Technic set. The model is of a scale that a minifigure could be seated in the cabin but would probably look out of place in such a ‘realistic’ creation, and their legs would interfere with the operation of the cyclic control.

At £179.99 / $209.99 / €209.99, 42145 Airbus H175 Rescue Helicopter is not a cheap set by any means. However, given the scale of the set and the frankly amazing engineering that has gone into creating the working controls, this feels like, if not a bargain, then undoubtedly value for money. While some elements are clearly helicopter-specific (although it’s certain that the LEGO community will find alternative uses for them) there are a great many useful Technic pieces in this set, which will be a welcome addition to anyone’s collection of elements.

It’s an interesting time to be a Technic builder. In the past few years a number of the flagship sets have focused more on creating striking-looking models while functionality seems to have taken a back seat. The recent 42143 Ferrari Daytona SP3 and 42141 McLaren Formula 1 Race Car are extremely enjoyable builds and produce beautiful results. But with the exception of the Ferrari’s gearbox, which seems to have been lifted wholesale from the Lamborghini of a few years previous, functions definitely seem to play second fiddle to looks.

Therefore to build a set that not only looks great on a shelf (although those rotor blades will mean you need quite a wide shelf), but also incorporates a mechanical function so realistic it could arguably be called educational, is extremely welcome indeed.

While the cyclic/collective is the party piece of the set, it’s by no means its only trick. There are manually-opening cabin doors and sliding doors on both sides of the main body. The motor, in addition to running the rotors, also powers a winch and raises/lowers the undercarriage.

Is 42145 Airbus H175 Rescue Helicopter perfect? No, but then few are. The weight of the tail structure means that it has a tendency to sag slightly, which is a minor point. The motor has two speeds (unlike a real helicopter) and due to the power having to be transferred through a large number of axles, gears and angles to reach the tail rotor, at the slower speed the design has trouble overcoming friction and backlash (the clearance between mated components). As a result, it can struggle to turn the tail rotor smoothly. At the higher speed, momentum overcomes this and both rotors turn properly.

In addition, the undercarriage, which is operated by way of a small linear actuator, occasionally fails to lower properly. This is again probably due to unwanted friction somewhere in the mechanism, and is likely to be a simple thing to overcome. So while there are some minor niggles, they shouldn’t – and don’t – take away from the fact that this is a terrific Technic set.

Consider supporting Brick Fanatics by purchasing your LEGO via our affiliate links. Thank you.

How long does it take to build LEGO Technic 42145 Airbus H175 Rescue Helicopter?

42145 Airbus H175 Rescue Helicopter is not a set to be rushed. A mistake at one point might only reveal itself much later on, requiring extensive remedial work, so take your time and be methodical. Allow between eight and nine hours to finish the set.

How many pieces are in LEGO Technic 42145 Airbus H175 Rescue Helicopter?

It takes 2,001 pieces to build 42145 Airbus H175 Rescue Helicopter. In the box there are 17 bags of parts, a battery box, one large motor, 2 sticker sheets and the manual. A couple of the rotor elements, plus the main rotor blades, appear to be new pieces. There are 37 stickers in total, all of which are straightforward to apply and do enhance the look of the finished model.

Excluding the rotors, 42145 Airbus H175 Rescue Helicopter is 61cm long, 17cm wide and 24cm tall with the undercarriage down. The main rotor has a diameter of approximately 54cm.

How much does LEGO Technic 42145 Airbus H175 Rescue Helicopter cost?