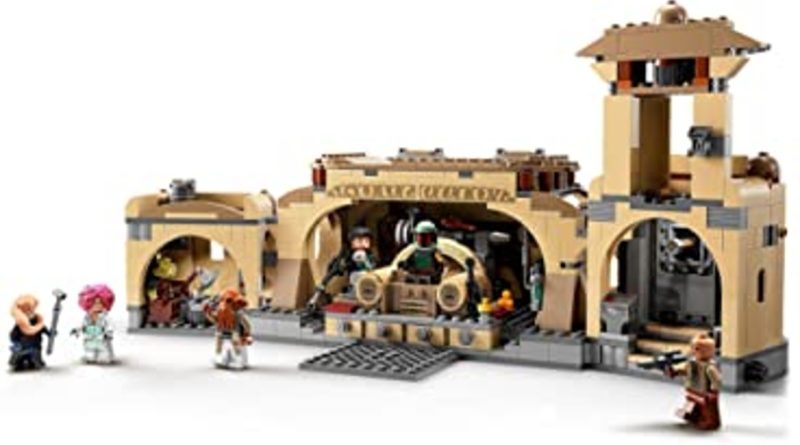 The first images of 75326 Boba Fett’s Throne Room have surfaced online, revealing the minifigures and price of the LEGO Star Wars set.

The LEGO Star Wars homepage of Amazon Germany has added a preview listing for 75326 Boba Fett’s Throne Room, confirming the previously rumoured set. The main listing for the model is not live on the online storefront, though the preview does offer a selection of low-quality images including one that gives us a closer look at the minifigures.

According to the retailer, the model is scheduled to release on February 15 and pre-orders can be made now despite no full listing being live. The build is priced at €80.12 on the retailer, meaning official costs might be around $80. The release date might only be an indication of when pre-orders are intended to go live and not confirmation of the set’s launch, given how close February 15 is.

As rumours indicated, 75326 Boba Fett’s Throne Room is based on the final moments of The Mandalorian’s second season and includes a roster of minifigures reflecting that.

Bib Fortuna, a Gamorrean guard, a Quarren, a Theelin, and a Weequay are all featured as well as Boba Fett and Fennec Shand without her helmet, which seems to be remaining exclusive to 75315 Imperial Light Cruiser. At least two new elements will debut in the set for Bib Fortuna and the Quarren.

As for the build itself, the palace is made up of three sections, including the main throne room, a small alcove and a tower. Features include flipping minifigures off the model mirroring the scene in The Mandalorian and the throne can be detached from the base entirely. The LEGO Group has yet to confirm any official details for 75326 Boba Fett’s Throne Room.